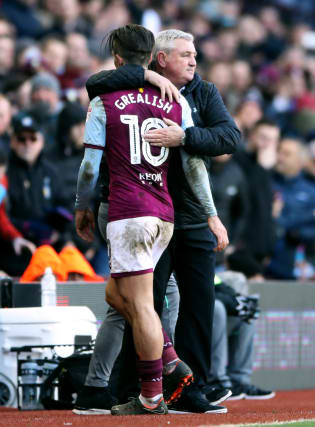 Bruce returns to Villa Park in charge of Newcastle on Monday, where Grealish will face his old manager provided he shakes off a thigh problem.

He suffered a much more serious injury under Bruce’s watch during a pre-season friendly two years ago when a blow to the kidney left him hospitalised and sidelined for several months.

His rehabilitation work stepped up a notch under the guidance of Oli Stevenson, Grealish’s former academy captain who was released in 2013 only to return as strength and conditioning coach.

Stevenson helped Grealish transform his physique and take his game to the next level but Bruce readily admits financial constraints rather than inspired decision making was behind the reunion.

“He (Stevenson) didn’t quite make it so went on to do strength and conditioning in the academy and worked his way up. We didn’t have one because we were skint and couldn’t employ one so we took this kid from the academy to come and work for the first team.

“And he single-handedly changed him, for me, in the gym and what he worked on. He came out after six months and we looked at him and went ‘oh my god’. Physique-wise he’s a beast now and I think there was a little bit of shock really.”

The combination of strength and skill have marked Grealish out for higher honours since his return to the top flight but Bruce does not expect the 24-year-old to be prised away from his boyhood club easily.

Asked if the player needed to move on to fulfil his promise, Bruce said: “Do you want me killed? I have to say fair play to the owners, even though they sacked me, the first thing they did was to give Jack Grealish a new five-year contract and say we want to build the team around him.

“How refreshing to every Villa supporter that was. He is the crown jewel and he never wanted to leave. It would be difficult for anyone to buy him with the size of contract he has got. He could play any team – Manchester United, Tottenham, Chelsea, Arsenal – I rate him that highly.”