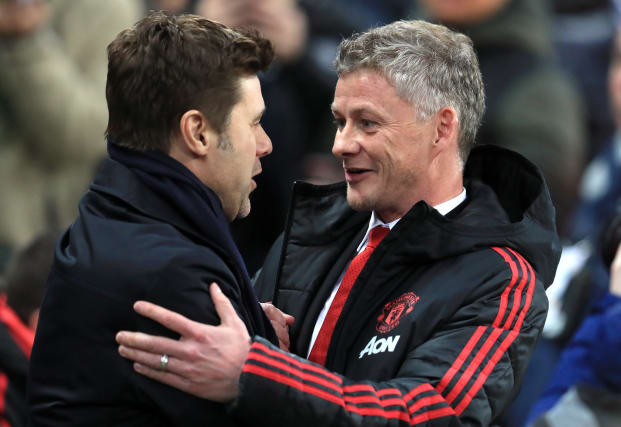 Manchester United manager Ole Gunnar Solskjaer has no concerns about his position despite the highly-rated Mauricio Pochettino’s exit from Tottenham.

Just 171 days after leading Spurs to the Champions League final, the fan favourite saw his five-and-a-half year stint with the north Londoners brought to an unceremonious end.

Solskjaer’s predecessor Jose Mourinho was swiftly appointed in a bid to fix Tottenham’s Premier League problems, while the availability of Pochettino has led to inevitable speculation about the Old Trafford hotseat.

The United hierarchy are known to be long-term admirers of the 47-year-old, but the PA news agency understands this week’s developments have not impacted their support of the 1999 treble hero.

Solskjaer also claims to be unmoved by Pochettino’s availability.

“Sorry to disappoint but it’s not going be about Jose or Mauricio,” Solskjaer said at the start of his press conference on Friday.

“I can start with it’s good to have Jose back definitely – especially for you guys, maybe for me because you can talk and write about everything else.

“And for Mauricio, it’s always sad when one of your colleagues, a good man, you lose your job before Christmas. It’s never nice to see so I just wish him all the best.

“In football you can never be surprised at anything, or you can’t be shocked at anything. For me, I’ve just got to focus on us.”

Asked if United links to Pochettino brings pressure, Solskjaer said: “No, it doesn’t bother me at all.

“I’ve got the best job in the world and I am sure if you’re in a job or if you’re out of a job and you’re a manager, you’d want this job.

“So, it doesn’t really matter, whatever happens around it. I’ve got to focus on my job at Man United, do it as well as we can.

“Obviously I speak with Ed (Woodward, executive vice-chairman), speak with the owners all the time about how we are going to move the club forward and that doesn’t change if some other clubs change their managers.”

The movement at Tottenham has also led to talk about Mourinho’s transfer plans, with a talk of another reunion Nemanja Matic among the more tongue-in-cheek suggestions.

But the Serbia midfielder, who has only made five United appearances this term, fuelled such talk by putting laughing and applauding emojis alongside an Instagram post joking the midfielder was waiting to join Mourinho in January.

Reminded of his comments saying that his players should be “boring” on social media, Solskjaer said: “That’s not a part of being boring.

“When it’s like this… you like Jose coming back and it’s going to be a spectacle and a circus. Nemanja has got a sense of humour.”

Matic, out for the last seven weeks, could be back in the squad when Solskjaer leads his side to Sheffield United on Sunday.

The 31-year-old, just like Luke Shaw and Axel Tuanzebe, is back in training but not fully match fit, which leaves Solskjaer with a selection headache given fellow midfielders Scott McTominay and Paul Pogba are sidelined.

“Scotty hurt his ankle so he’ll be out for still a couple of weeks, I reckon, so he won’t be ready for this week,” Solskjaer said. “We’ve lost (Marcos) Rojo, he’s injured.

“Paul is still injured, but we’ve got Axel, Luke and Nemanja back in training, so we’re looking better, we’re getting numbers back.

“Maybe not match fit. Axel and Luke have been out for a long time, Nemanja has been out. But numbers-wise in training we’re stronger.

“(Pogba) had another test and a scan just at the start of the international break and it’s not healed yet, but he’s stepping up his recovery and he’s out of a cast so he doesn’t have to have the cast on.

“He was in a cast for about for six or seven weeks – you do lose loads of muscle, so he’s gradually now just stepping up, walking on the treadmill, biking with a free ankle.