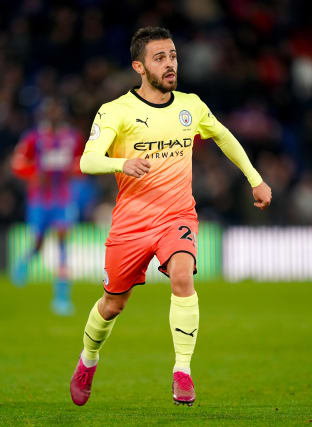 Pep Guardiola has again defended Bernardo Silva after the Manchester City midfielder was banned for sending an offensive tweet.

The Portugal international will miss the champions’ Premier League match with Chelsea at the Etihad Stadium on Saturday as he serves a one-match suspension.

Silva was found guilty of misconduct by the Football Association after comparing City team-mate Benjamin Mendy to the character on a packet of Conguitos, a brand of Spanish confectionery.

As well as the ban he was fined £50,000 and asked to undertake an education course. Guardiola spoke up for the player when the controversy first arose and has again strongly backed the 25-year-old.

Guardiola said: “He has been accused of something he is not. He will be careful to use social media.

If this can help to do a better society, OK, I am pretty sure Bernardo accepts this punishment, but he is not like he has been accused. They don’t know him.”

In positive news for City, goalkeeper Ederson will be back to face Chelsea. The Brazilian missed the defeat to Liverpool a fortnight ago with a hamstring injury but has been working as normal this week.

Guardiola said: “He has been training the last two or three days without pain.”

The 3-1 loss at Anfield left City fourth in the table, nine points behind leaders Liverpool and with Leicester and Chelsea having moved above them.

With three defeats already, City now face an uphill battle to retain the crown they have won for the past two seasons but Guardiola insists the title race is far from done.

He said: “A few weeks ago there were two contenders and now we have four so maybe there will be six in a few days. We are in November, there is a long way to play.”

Chelsea have moved into contention after winning their last six games and Guardiola has been impressed by their new manager Frank Lampard.

The former Chelsea and England midfielder, who had a spell at City towards the end of his playing career, took over at Stamford Bridge in the summer after guiding Derby to the Championship play-off final.

Guardiola said: “I think Chelsea, over many years, have been an incredible top team, but from the beginning (of this season) his team have played really good.

“He is consistent with his ideas and the results are there. I’m happy for him. I don’t know him well, but a little bit. I have some info because he was here and he is an excellent person.

“For English football it’s great when young English managers take over and do well. Playing the way they play, I think that’s perfect for English football. It’s the best way to get better for the national team and the club.”