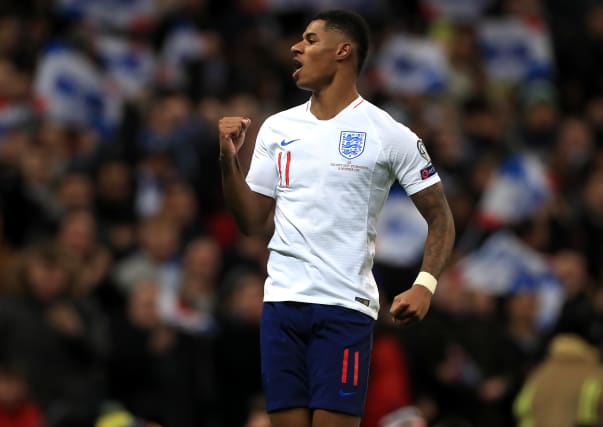 Marcus Rashford believes the “frightening” attacking prowess shown by England throughout Euro 2020 qualification should put the continent’s best on notice.

The Three Lions finished Group A with a 4-0 win in Kosovo on Sunday afternoon to finish with 37 goals from their eight qualifiers.

Harry Kane and Raheem Sterling accounted for 20 of those while Rashford and Jadon Sancho also weighed in with a combined total of five.

While the level of opposition could be questioned, Gareth Southgate’s side largely blew away anyone they came up against other than a surprise 2-1 defeat in the Czech Republic last month.

The victory in Pristina confirmed England as top seeds for next summer’s European Championships and Rashford has warned their rivals that the attacking players can run roughshod over the finals, too.

“I think all of these games are just gearing you up for the summer and if we go into the summer anywhere near the sort of form we have been in recently then it will be a successful tournament,” the Manchester United forward said.

“We have got a couple more games leading up to the summer and take them to improve as a team and just sharpen up now for the tournament. We want to go and give it our best shot at winning.”

Asked about his work alongside Kane and Sterling in a front three, Rashford replied: “I think it is obviously a good combination but we have played games without that particular front three and it is frightening what we can do as a group of attackers.

“You have to use it to your advantage and maybe it isn’t working in one game for that three and someone has to come in and make the difference – we have to use that to our advantage, 100 per cent.”

Despite still being one of the youngest members of Southgate’s squad, Rashford has already tasted international tournament football on two occasions.

He was part of Roy Hodgson’s squad at Euro 2016 which ended in a shock defeat to Iceland at the round of 16 and then played his part in taking England to the World Cup semi-finals in Russia last year.

That experience leaves Rashford with a decent knowledge of what it takes to get anywhere near the success the country craves and he feels the number of attacking threats means Southgate can keep his artillery loaded for the entirety of the summer.

“I have been in two tournaments now and the squad is so important and, with the qualities that every individual has in this team, it is something we have to use to our advantage,” he said.

“People are going to be playing at different moments but when you are on the pitch you have to do your best and try and come up with the goods.

“But it is good competition, we really do have that kind of environment when we are in the camp together and it is positive.

“I have to use that to my advantage and try and help the team, at the same time it is about winning games. That is what we came to Kosovo to do and I’m looking forward to the tournament now.”

Rashford is currently enjoying a fine run in front of goal, scoring nine in his last 10 games for club and country and the 22-year-old puts it down to playing more consistently.

“It has been a good month and a half but you take it a game at a time and just try and keep improving,” he added.

“It has been a tough period and now I’m sort of getting consistent games and playing week in, week out and as a forward that has huge importance, especially with chances.”