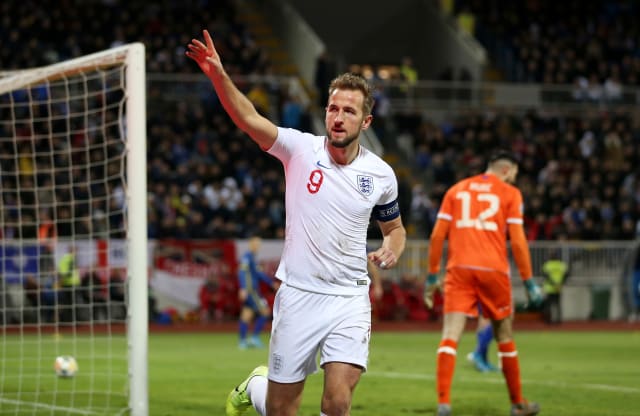 Harry Kane became the first England player to score in every game of a European Championship qualification campaign as he netted in Sunday’s 4-0 win in Kosovo.

Kane scored 12 goals in the eight qualifiers and moved up to sixth in the list of England’s all-time record goalscorers.

Of those players ahead of him, only Jimmy Greaves has a better goals-per-game average for his country and, at his current scoring rate, the England captain will surpass Wayne Rooney’s national record of 53 goals in another 31 internationals.

England opened their campaign by thrashing the team that would ultimately finish behind them as runners-up. Raheem Sterling scored a hat-trick and also won the penalty in first-half stoppage time that gave Kane his first goal of the campaign.

Another five-goal display from England and Kane grabbed the fourth in Podgorica. Sterling broke clear down the right and crossed for the Tottenham striker to slot in from close range.

Kane grabbed the first of his two hat-tricks during the campaign. Again, his first came from close range having been found from the right by Sterling and he added a second from the spot in the 50th minute after Marcus Rashford was fouled. Kane then turned provider for Sterling before he earned and then dispatched a 73rd-minute penalty.

England played out an eight-goal thriller in their first meeting with Kosovo. After the visitors took a surprise first-minute lead, Sterling nodded in an equaliser before Kane put England ahead in the 19th minute. He collected Sterling’s pass just inside the area, worked the ball on to his left foot and fired through the goalkeeper’s legs. An own goal and a Jadon Sancho double made it 5-1 at half-time before Kosovo fought back.

All looked rosy after five minutes. Sterling had been brought down in the penalty area and Kane had sent the goalkeeper the wrong way from the spot. But Czech Republic fought back to hand England their only defeat of the campaign.

In a game overshadowed by racist abuse from the Bulgaria fans, Kane rounded off a thrashing in the 85th minute. He had already set up both of Sterling’s goals and one of Ross Barkley’s efforts before he won possession deep in Bulgaria’s half, pushed the ball through a defender’s legs and tucked a low effort into the near corner.

England secured qualification in style, with their captain grabbing an 18-minute hat-trick. Kane headed in Ben Chilwell’s 19th-minute free-kick to make it 2-0, nodded in the same player’s corner five minutes later and then controlled Trent Alexander-Arnold’s cross before beating the goalkeeper from close range.

Kane had to wait until the 79th minute in Kosovo to complete his 100 per cent campaign. Sterling’s right-wing cross was deflected high into the air to the back post, where Kane was waiting to slam home his 32nd goal for his country. He still had time to play in Mason Mount to score his first international goal.