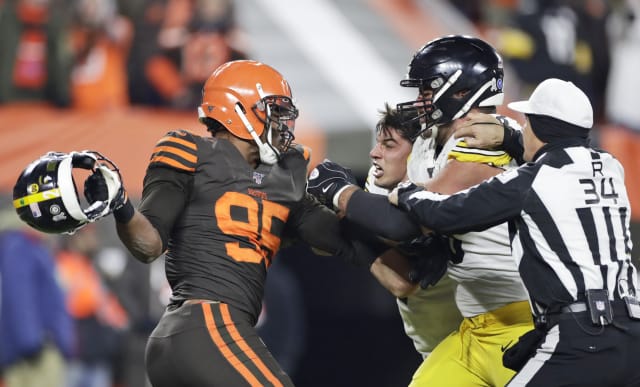 Cleveland Browns’ win over AFC North rivals Pittsburgh Steelers was marred by ugly scenes at the end of their 21-7 triumph at the FirstEnergy Stadium.

A scrappy game in Cleveland turned sour as a skirmish between the two sides erupted with eight seconds remaining when defensive end Myles Garrett was ejected after tackling Steelers quarterback Mason Rudolph.

Garrett grappled with Rudolph on the ground well after the quarterback had passed to Trey Edmunds for an 11-yard gain.

The Cleveland player then ripped off Rudolph’s helmet off and swung it at the Pittsburgh man, making contact with his head.

Garrett, who is expected to be handed a lengthy ban after the incident, told NFL.com: “I made a mistake, I lost my cool and I regret it. It’s gonna come back to hurt our team.”

Odell Beckham Jr. thought he opened the scoring for Cleveland with his second touchdown of the season, only to see the called reversed but quarterback Baker Mayfield ran up through the middle from a yard in the next play.

The Browns led 14-0 at break thanks to Jarvis Landry touchdown but Pittsburgh hit back in the third quarter with a score of their own through Jaylen Samuels before team-mate Nick Chubbs became the first player to make 1,000 rushing yards this season.

Cleveland sealed victory and improved their record to 4-6 when Stephen Carlson scored their third touchdown of the match before the late events overshadowed their second successive win.