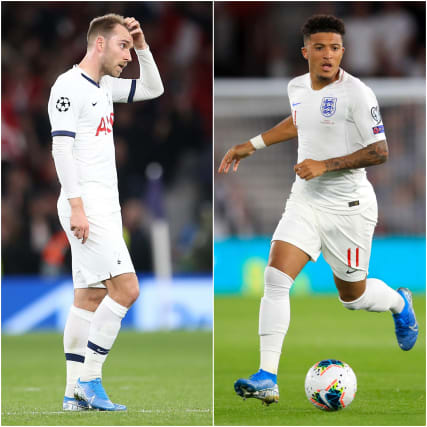 Borussia Dortmund’s Jadon Sancho wants to leave the German side, with  Liverpool among the clubs showing interest in the 19-year-old England winger, the Daily Mail reports.

Spurs fear a triple blow in that Christian Eriksen, Jan Vertonghen and Toby Alderweireld could all leave on free transfers when their contracts end next summer, according to the Daily Star.

Chelsea’s Brazil winger Willian, whose contract at Stamford Bridge expires next summer, is a target for Juventus and Barcelona and they could try to sign the 31-year-old on a pre-contract deal in January, the Daily Mirror says.

Bayern Munich look set to return with a fresh bid for Manchester City’s Leroy Sane after a serious knee injury prevented them moving for the 23-year-old in the summer, according to the Daily Mail.

David Silva: The Manchester City player, 33, is in line to join 35-year-old fellow Spanish midfielder Andres Iniesta at Japanese club Vissel Kobe once his contract at Etihad Stadium expires in the summer, according to the Daily Mail.

Habibou Diallo: Leicester are being linked with a January move for Metz’s 24-year-old Senegal forward, the Leicester Mercury says.