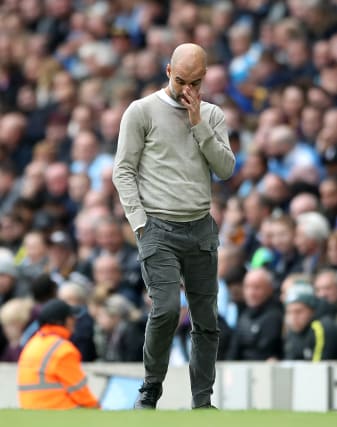 Pep Guardiola took the opportunity to criticise his Manchester City side after their clash with Aston Villa – because they won.

The City boss felt the champions underperformed in the first half of Saturday’s 3-0 win at the Etihad Stadium.

“If we play like we did in the first half, we will be relegated or in the relegation positions,” he said after second-half goals from Raheem Sterling, David Silva and Ilkay Gundogan secured victory.

Had they not won, Guardiola suggested he may not have been as forthright in his criticism.

The Spaniard said: “One word I hate is the word ‘complain’, so normally when I say something not nice it’s after a victory. I would never say it after a defeat.

“We were punished in some defeats and I shut my mouth, I didn’t say anything, so it is what it is.”

Guardiola also does not want to complain about the problems that have forced him to play players out of their natural positions in recent weeks.

This has most notably occurred in defence, where Fernandinho and Rodri have had to cover for injuries. John Stones and Nicolas Otamendi are now fit again, but Rodri has since picked up an injury and Fernandinho will be suspended for the Carabao Cup clash with Southampton on Tuesday.

Guardiola said: “For the short term we can handle it. For a long time, I don’t know.

“And of course against top, top, top, top teams, when you don’t have players playing in their own position, I don’t know what’s going to happen.

“But before it’s going to happen I’m not going to say it’s a disaster or what a pity.”

City made the breakthrough in the first minute of the second half as Ederson went route one, Gabriel Jesus nodded on and Sterling raced through to score.

Villa goalkeeper Tom Heaton admits he could only admire the way his opposite number Ederson switched play in that manner, and with such accuracy.

“He suits the way they play and still has that long threat. It makes it difficult to stay compact if they can go over the top.

“You should never force it playing out from the back and City have options everywhere, which is the big thing. Each player knows those options.

“What I like about them is it’s not always 100 per cent short. If it’s not on, then go longer. They have that balance.”

Heaton felt City’s controversial second goal, which was initially awarded to Kevin De Bruyne and subsequently credited to Silva by the goal accreditation panel, should have been disallowed.

Had the VAR, which looked at several replays of the goal at the time, ruled that Silva had got a touch to De Bruyne’s cross, then it could have been disallowed for offside against Sterling.

Heaton said: “De Bruyne has played the ball in and Raheem’s come across my eyeline. As he has, Silva’s taken a touch. I couldn’t see that but could hear it.

“I’m not even totally convinced it didn’t graze Raheem’s shorts to be honest. It was offside for me.”

Despite the result, Heaton felt Villa acquitted themselves well.

“It hurts now but when the emotion dies down there will be some really good stuff to take from it,” he said.