Boothroyd accepts Hudson-Odoi is available as ‘part of his rehab’ 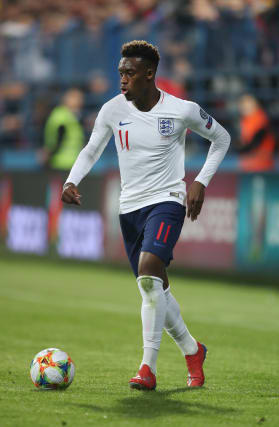 England Under-21s boss Aidy Boothroyd accepts that Callum Hudson-Odoi is in his squad as “part of his rehab”.

The 18-year-old has just returned to action after a serious Achilles injury and has been included in Boothroyd’s Young Lions group for Friday’s friendly against Slovenia and Monday’s EURO qualifier against Austria.

He has hit the ground running for Chelsea, scoring one goal and making three more in his four appearances, but was not deemed ready for Gareth Southgate’s main squad.

Boothroyd is delighted to finally get his hands on the teenager following his swift call-up to the senior squad last time he was with the Under-21s.

“Callum has done very well. He’s only at the start of his career and had a difficult injury,” Boothroyd said.

“We’re almost part of his rehab really, to get him back to that place where he can challenge for a senior place.

“We only had him for about half an hour last time. He was having his dinner and before he’d finished the starter we had to send him back up to Gareth.

“It was nice to spend a few more hours with him. I think we’re all right this time.”

Hudson-Odoi is one of several young players impressing in Frank Lampard’s side this season as a result of their transfer ban.

Fikayo Tomori, Tammy Abraham and Mason Mount are in the senior squad and Boothroyd believes Premier League teams might start differently about using younger players as a result of Chelsea’s situation.

“Through what’s happened at Chelsea and seeing the emergence of these players, it might seem a surprise to some, but when you work with them, I think all that is needed is for youngsters to get an opportunity.

“For too long we’ve had players who’ve reached a ceiling in development that they can’t get through because they don’t get the chance.

“What’s happened at Chelsea is a great example of a team having to use young players and actually, they’re not bad.

“What I will say is that it’s certainly made people think differently, there’s been a shift, because people are doing so well, the top scorer in the Premier League is an Englishman- and it’s not Harry Kane, it’s Tammy Abraham, a young player, 21 years old who’s taken the chance he’s been given.”

Boothroyd will be unable to call on Morgan Gibbs-White, Mason Greenwood and Reiss Nelson after they all withdrew.

Gibbs-White and Greenwood are suffering from back injuries and Nelson has a knee injury.

They were replaced by Sam Surridge and Ben Wilmot in the squad.