Matty finish a bonus for Bruce against struggling former club 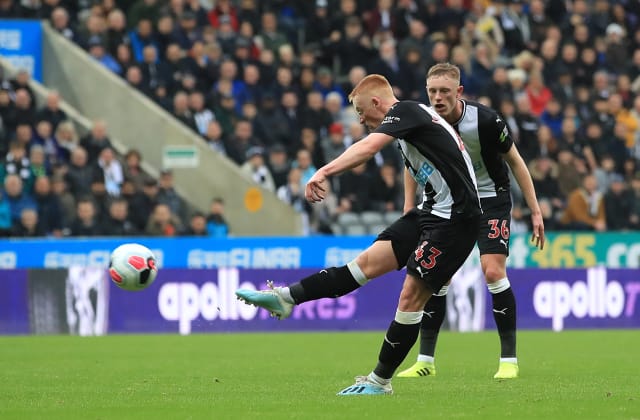 The 19-year-old, who lined up alongside older brother Sean in the Magpies’ midfield, smashed home a 73rd-minute winner to cap a perfect day at St James’ Park.

In the process, he handed Bruce his first win over the club for which he played with such distinction as a manager and extended the Red Devils’ run without an away victory to 11 games in all competitions.

Bruce said: “It’s quite ironic. Matty Longstaff’s beaten them in his first game and I’ve been going 20-odd years. I’m delighted for everyone concerned, and of course the response was the great thing.

“When it fell to him – he blasted one in here against St-Etienne [in pre-season] in exactly the same position, and we’ve seen him in training.

Bruce went back to basics after last weekend’s 5-0 drubbing at Leicester, but boosted by the return from injury of lively winger Allan Saint-Maximin and the energy provided by the Longstaff brothers, saw his team turn in a vastly improved display just when they needed it most.

The win was thoroughly deserved as the visitors, who failed to muster a shot on target against AZ Alkmaar on Thursday evening, once again proved blunt in attack and were made to pay for it by the younger Longstaff.

Head coach Bruce said: “He trains every day with a big, beaming smile on his face, he’s refreshing, wants to play, he’s a great kid and I’m delighted.

“Typical of him, the first thing he said to me coming off was ‘Thank you’. It’s ridiculous after what he’s just done.”

If Bruce was thrilled to have taken the wind out of the sails of some of his critics, opposite number Ole Gunnar Solskjaer cut a frustrated figure as he assessed the wreckage of a defeat which left his team in 12th place in the table, 15 points adrift of leaders Liverpool.

The Norwegian said: “We have given ourselves a very, very tough task to get into the top six, never mind top four, and we’ve got to get results straight away.

“We need to get on a run, get momentum. I can’t give you what’s acceptable – every game should be one that we should look to win at this club.”

Things might have been different had defender Harry Maguire buried a free header on the stroke of half-time – but his manager did not attach too much blame to the £80million summer signing.

“If you’re 2-0 up and your team is winning every game, he’ll close his eyes and score on that one. At the moment, it’s just not going for us and Harry knows he could have, should have scored.

“We know it’s a big opportunity, a big moment in the game.”