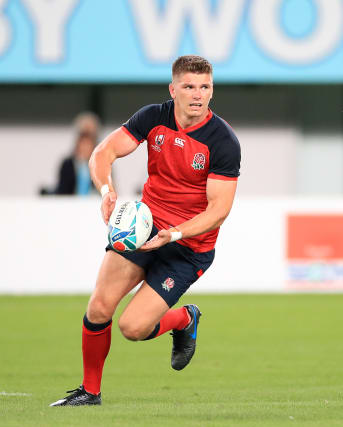 England became the first side at the World Cup to book a quarter-final spot as they capitalised on the early red card to Tomas Lavanini to comfortably beat Argentina 39-10.

Elsewhere, Australia bounced back from their Wales defeat to sweep aside Uruguay 45–10 while Kotaro Matsushima’s try with the clock in the red sealed a 38-19 bonus-point win for tournament hosts Japan over Samoa.

With defending champions New Zealand in action on Sunday, the PA News agency takes a look at the latest talking points.

Farrell fine despite another head blow

There have been a record five red cards in the tournament so far but Owen Farrell has been the victim in two instances, with the latest coming when he was caught in the jaw at the Tokyo Stadium by Lavanini’s shoulder.

Pumas lock Lavanini was given his marching orders, leaving his side a man down with less than 20 minutes played.

Farrell – the recipient of a similar challenge from the USA’s John Quill, who was also shown a red card, nine days earlier – was able to continue and allayed fears about his health.

The England captain said: “I feel fine. It’s obviously concussion that’s the worry but I didn’t get hit anywhere near the top of the head. Maybe your jaw gets a bit sore but I was fine.”

A report emerged overnight that Jones was hoping to attend the funeral of his Randwick mentor Jeff Sayle, which takes place in Australia on the eve of next weekend’s climax to Pool C against France.

The flight from Tokyo to Sydney takes nine-and-a-half hours and England’s head coach admitted the logistics involved makes it unlikely he would be present.

“Unless the RFU hire a concord for me, it’ll be quite difficult to go,” Jones said.

“I’m negotiating with BA, concord and the RFU to see what we can do. Obviously I’d like to go but I’ve got a lot of responsibility here. I’m conscious of that.

“The travel makes it difficult so I doubt very much that I’ll be going, as much as I’d like to.”

Australia went to the top of Pool D, albeit having played one more game than Wales, thanks to a seven-try demolition of Uruguay.

However, there are once more questions over their discipline, with Adam Coleman and Lukhan Salakaia-Loto sin-binned for high tackles in the first half, while they conceded 12 penalties to their opponents’ five.

The Wallabies are already without Reece Hodge, who is serving a three-match ban for a dangerous tackle in their opener against Fiji.

Coach Michael Cheika said: “We are giving away too many penalties full stop. But I’m not going to talk about tackles. I’m going to steer clear of that.”

Japan moved to the brink of the quarter-finals after going top of Pool A, thanks to tries from Timothy Lafaele, Kazuki Himeno, Kenki Fukuoka and Matsushima in a win over Samoa.

Coach Jamie Joseph said: “This is the first time ever Japan’s got themselves in the position where they can top the pool so it’s new territory for us.”

Can Barrett be a perfect 10 for All Blacks?

All Blacks assistant Ian Foster said: “Our expectations are that Jordie just goes out and runs the team like any 10 does.”

Jefferson Poirot will lead out France for their clash against Tonga but he is happy to defer to regular captain Guilhem Guirado, who is among the replacements.

Poirot said: “The armband belongs to Guilhem Guirado. He’s the captain, the one who led the talking this week. But we’ve had this rotating system for Tests, which has worked well and we’re continuing that way.

“Guilhem is the captain, and it will stay that way. What he has to say is important.”