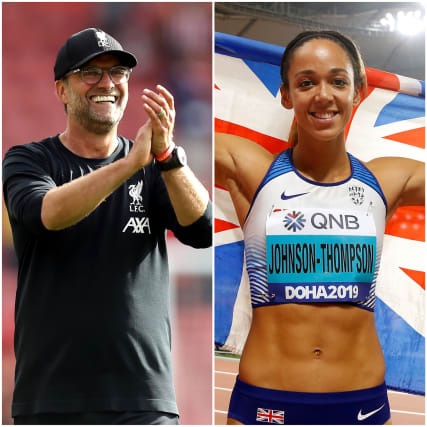 Jurgen Klopp has congratulated Katarina Johnson-Thompson after the Liverpool fan won heptathlon gold at the World Championships in Doha.

Klopp conceded he had not watched Johnson-Thompson’s golden moment but expressed his delight at her achievement, as well as that of Germany’s Niklas Kaul, who triumphed in the decathlon.

The Reds boss said: “I am a big supporter of these kind of sports anyway, so I will say congratulations, brilliant.

“I knew about her relationship with Liverpool before, but I didn’t watch it last night, I saw it in the newspapers this morning. Well, well done.

“The German headlines are not too bad as well, because the guy who won the competition is from Mainz, a 21-year-old. So, a big day for these two wonderful athletes. Really great.”

Klopp was asked for his own sporting inspirations after being told Johnson-Thompson had been inspired by his side’s Champions League semi-final win over Barcelona last season.

“Our Barcelona game as well!” he responded. “It was probably the standout moment in the last few months.

“Over the years I got inspired by so many sporting moments, and what these athletes do and what they sacrifice to be at the top level.

“Especially this kind of sport, with seven different things to do. I studied sports science and we had to do a decathlon. That looks really funny in some moments, but I couldn’t have more respect for what they do, being so focused.

“We can really use things from this – how they deal with setbacks, how they bounce back in the next one, stay calm when they know it’s not their best skill, stay focused, use your skills, respect your weaknesses, work on them but don’t get nervous because of them. So many things you can take from these people.”

Revealing why he had had not tuned in, Klopp said: “I usually watch Olympic Games, World Championships, live athletics. But last night I had to sleep.”