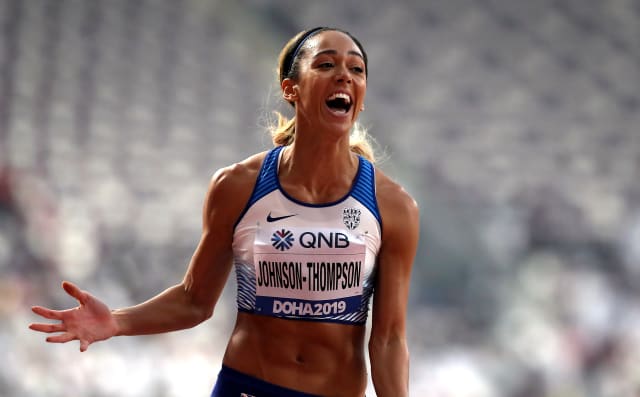 Great Britain’s Katarina Johnson-Thompson has won gold in the heptathlon at the World Championships in Doha.

She becomes just the eighth woman to win gold for GB in the championships’ history and second in Qatar.

Here, the PA news agency looks at the seven other gold medalists.

Fatima Whitbread improved on her 1983 silver at the first World Championships by winning the javelin in Rome.

She beat bitter rival Petra Felke with a throw of 76.64m to win Great Britain’s only gold medal of the Championships.

Felke, though, hit back a year later and took Olympic gold with Whitbread second.

Three years after Olympic silver in the 10,000m in Seoul, Liz McColgan went one better at the World Championships in Tokyo.

It was one of two golds for Great Britain that year, along with the 4x400m relay squad.

Daughter Eilish won silver in the 5,000m for Great Britain at the European Championships last year.

A year after her 400m hurdles victory at the Barcelona Olympics Sally Gunnell was winning gold again in style at the World Championships in Stuttgart.

She won in 52.74 seconds – setting a new world record which was broken two years later.

It remains the British record and gold was an improvement on the silver from Toyko in 1991, while Gunnell also won bronze in the 4x400m relay in Stuttgart.

Distance runner Paula Radcliffe won Britain’s only gold medal of the World Championships in Helsinki when she took the marathon title.

She set a championship record time of two hours 20:57 minutes, which still stands.

It was a rare bright moment for Great Britain in Finland as they won just three medals.

Despite running just five competitive races before the final she won Great Britain’s only gold at the Championships.

Heptathlon star Jessica Ennis-Hill took three world titles with her first crown in Berlin 10 years ago as she beat Jennifer Oeser of Germany by 238 points.

In 2011 in Daegu she originally finished second behind Tatyana Chernova but the Russian was disqualified for failing retrospective doping testing and in 2016 she was upgraded to a gold by the Court of Arbitration for Sport.

A final title in Beijing came after she returned after having son Reggie in 2014.

Asher-Smith, 23, had already banked a 100m silver medal on Sunday and was favourite for the 200m title.

She stormed to victory, breaking her previous British record, to win in 21.88 seconds.