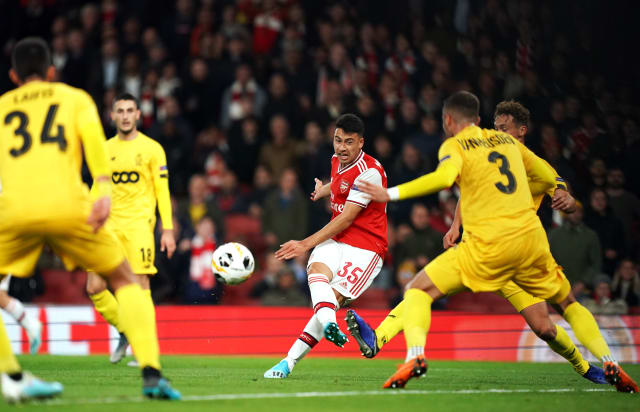 Bukayo Saka stole the headlines in the recent win at Eintracht Frankfurt and has since progressed into the Gunners’ Premier League side, with Emery making 10 changes from the draw at Manchester United for the 4-0 success here.

Martinelli, who scored twice on his first start for the club in last week’s Carabao Cup win over Nottingham Forest, repeated the feat with another double in three first-half minutes before Joe Willock and Dani Ceballos completed the rout.

On a night when Kieran Tierney, Rob Holding and Hector Bellerin – who captained the side for the first times – continued their comebacks from injury, Martinelli shone.

The 18-year-old was arguably the least known of Arsenal’s summer signings and Emery insists he is not a natural striker but, in for the lethal Pierre-Emerick Aubameyang, he was ruthless as he bagged a brace and teed up Ceballos for his first goal for the club.

Willock, too, looked strong while Reiss Nelson was handed a start and Ainsley Maitland-Niles was offered the opportunity to impress further up the pitch – the continued absence of Mesut Ozil an intriguing side note to Emery’s selection.

Arsenal started well and were pushing for an early opener, although Bellerin had to be alert to head the ball away after goalkeeper Emi Martinez flapped at a Liege corner and got nowhere near it.

The Gunners pounced from the very next attack, Martinelli scoring with a great header as he stooped to turn Tierney’s near-post cross past Vanja Milinkovic-Savic.

The second came soon after as Martinelli bent in a curling effort to put Emery’s side in complete control, with Willock ballooning a chance well over the crossbar soon after.

He made amends for missing that opportunity by sweeping home Arsenal’s third in the 22nd minute, slotting home after Nelson’s deflected strike fell perfectly into his path.

The goals dried up for the remainder of a first half which Arsenal were largely playing in second gear, such was the gulf in quality to their opponents, who at least forced Martinez into action with a near-post save from Nicolas Gavory’s strike.

Arsenal were denied what looked like a stonewall penalty just before the interval as Nelson nicked the ball away from Milinkovic-Savic before being brought down by the goalkeeper, although referee Sandro Scharer waved away the appeals.

Martinelli fluffed two decent chances to secure his hat-trick as the second half started the same way as the first had concluded and Ceballos got in the act by bundling home the fourth from Martinelli’s cross after 57 minutes.

Again the teenage Brazilian would be prevented from taking home the match ball as Milinkovic-Savic shovelled his header behind, with Emery showing now let-up as Matteo Guendouzi, Nicolas Pepe and Aubameyang all came off the bench.

Pepe saw a goalbound shot cleared with Bellerin sending the rebound wide, while Ceballos was denied a late second and Martinelli was unable to convert an Aubameyang cross as Arsenal dominated until the last.