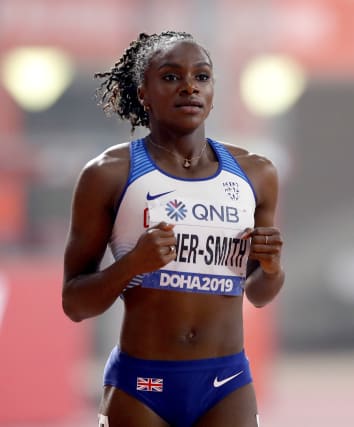 Dina Asher-Smith’s chances of World Championships gold continued to grow after a raft of rivals pulled out of the 200m – as Adam Gemili kept his medal hopes alive.

Four-time European champion Asher-Smith claimed 100m silver on Sunday in the first part of her treble medal bid and breezed into the 200m semi-finals on Monday.

Defending champion Dafne Schippers has withdrawn from the Championships with an adductor problem and the Ivory Coast’s Marie-Josee Ta Lou, who won 100m bronze, is also out injured.

New 100m champion Shelly-Ann Fraser-Pryce will not run while Nigeria’s Blessing Okagbare was disqualified for stepping out of her lane in heat five on Monday.

Asher-Smith broke her own 100m British record to set 10.83 seconds and win her first individual global medal in Doha but the 23-year-old insisted there was no release of pressure.

“I’m just proud of myself, I’ve definitely taken my time and worked my way up from being a relay runner and then through Beijing through London and the broken foot.

“It’s just been a lot of hard work that I’m proud. We’ve got more goals to go through the week. I’ve never really got nervous, not since 2013 but I definitely get adrenaline which is good.

“That means it’s all within my control. But no I wasn’t nervous because I knew that I had it within me.”

She added: “It’s my first worlds. This time two years ago, if you’d said I was coming I’d have laughed in your face.

“It’s a new experience for me. This is the longest I’ve ever been away from home. There are loads of first times.

“My coach isn’t here which has been tough, as well as dealing with injuries. It’s been tricky but I’m through to the semis.”

Gemili ran a season’s best of 20.03s and told the BBC: “My coach said ‘win the semi, get a good lane and once you are in the final you have a chance of medalling’.

“I feel good, I feel fit and healthy, so no complaints. I don’t think I have quite lived up to what people expected and I am just trying to run my best.”

Zharnel Hughes failed to progress and Miguel Francis was forced to pull out after suffering a quad strain in Sunday’s heats.

Hughes, who came sixth in the 100m final, added: “I try not to dwell too much in disappointment – as an athlete you will feel some over the years and it’s hard.

“Sometimes it can be a heavy pill to swallow, but at the end of the day you have to recover yourself and try not to get too consumed in disappointment.”