Day 11 at the Rugby World Cup: Scotland back on track 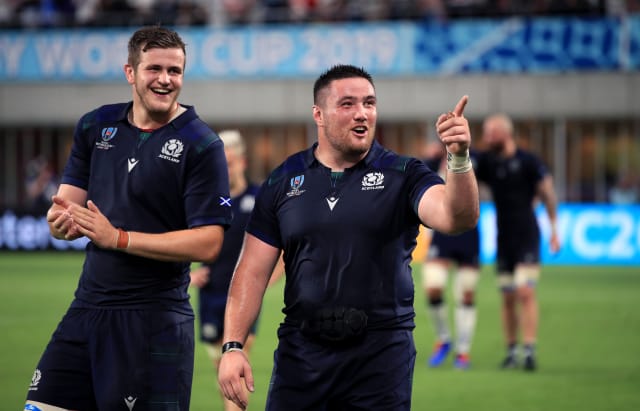 Scotland kept their Rugby World Cup hopes alive with a 34-0 victory over Samoa in Kobe.

The fight for the two spots in Pool A is a three-way battle as Japan lead the way on nine points, with Ireland on six and Scotland five at the halfway stage of qualification.

Here, the PA news agency wraps up the action from day 11 in Japan and takes a look at Wednesday’s fixtures when France and New Zealand are back in action.

Scotland destiny in own hands

Anything other than a bonus-point win against Samoa would have left Scotland at serious risk of an early elimination.

The combination of a crushing opening defeat to Ireland and Japan’s shock win over Joe Schmidt’s side had left Scotland playing catch-up for a quarter-final place.

But the five points picked up against the Pacific Islanders gives them real hope of making the last eight.

Scotland must now repeat the trick against Russia on October 9 – and if they do that they can seal a place in the last eight by defeating Japan while denying the tournament hosts a bonus point in their final Pool A game.

Scotland were the last of the 20 teams at the 2019 World Cup to cross the try-line.

Sean Maitland ended Scotland’s 110-minute wait for a try in Japan after Samoa had frustrated them for half an hour at Kobe’s Misaki Stadium.

Fly-half Finn Russell spotted space down the left and his perfect crossfield kick found Maitland and allowed the Saracens wing to dot down.

Samoa had wing Ed Fidow sent off in the final six minutes after picking up a second yellow card, and failed to score any points for the first time in their World Cup history.

The action takes a short break with no games until Wednesday.

France will play their second game in England’s group against the United States in Fukuoka.

Les Bleus edged out Argentina 23-21 in their opening match and are likely to be meeting Eddie Jones’ side in a Pool C decider on October 12.

Reigning champions New Zealand are also back in Pool B action against Canada in Oita.

The All Blacks started with a 23-13 win against South Africa, while Canada lost their opener to Italy 48-7.

Beauden, Jordie and Scott Barrett will become the first trio of brothers to appear for New Zealand at a World Cup against Canada.

Scott and Jordie joined Beauden in an All Blacks match for the first time in 2017 by coming off the bench against Samoa. They made their first start together last year against France.

Tongan trio Elisi, Manu and Fe’ao Vunipola were the first trio of brothers to start in the same World Cup match, against Scotland in 1995. Fe’ao is the father of current England players Mako and Billy Vunipola.

The three Pisi brothers – Ken, Tusi and George – all played for Samoa against South Africa in 2015. But only Ken started that game.