Coleman keeps his cool in the heat of Doha 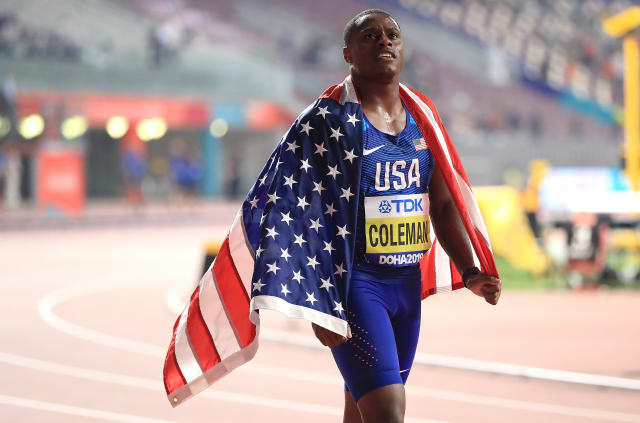 Christian Coleman stormed to 100 metres victory at the World Championships and immediately dismissed the controversy surrounding him.

The American, who arrived in Doha following a missed drugs tests charge, clocked a world leading time of 9.76 seconds – making him the sixth fastest man in history.

“It’s been behind me. That’s not something I was ever focusing on. I knew that I would be here,” said the 23-year-old, who claimed silver in London two years ago.

“It’s sad someone would try to skew my reputation. I don’t know how the information got out there to the public but it shouldn’t have.

“I’ll just keep doing what I’ve been doing and focus on me. Now I’m a world champion and that’s something that nobody can ever take away from me.

“It’s pretty disheartening to know that there are people out there saying things, especially when they don’t know me personally at all. I feel at this point I am all over it.

“Obviously people think what they want to think. I cannot spend much time explaining a situation to people who aren’t interested in truth. So, I wasn’t focused on that at all.”

Great Britain’s European champion Zharnel Hughes, who runs in the 200m heats on Sunday, was sixth in 10.03secs at the Khalifa International Stadium.

He said: “It was a messed up race. Unfortunately my body wasn’t responding and when I pushed off I wasn’t feeling myself.

“I really don’t know, I was fine after the semi-finals, I was charged up for the race but as the gun banged I started feeling light headed.

“I tried my best to get composed and every time I tried to do something which was relaxing it just kept getting worse.”

It was the first major championships without Usain Bolt since 2003 and Coleman, who won silver in London two years ago, dominated – being the only man to run quicker than 10 seconds in all three races.

Great Britain’s Adam Gemili and Ojie Edoburun failed to progress beyond the semi-finals.

Gemili, who will also run the 200m, finished third in his semi while Edoburun came fifth in 10.22s.

Earlier, Dina Asher-Smith safely reached the 100m semi-finals as she eyes her first individual medal at this level in Sunday’s final.

The four-time European champion ran 10.96s but Jamaica’s Shelly-Ann Fraser-Pryce showed Asher-Smith what she is up against with a time of 10.80s – the fastest women’s 100m heat in World Championships history.

Daryll Neita and Imani Lansiquot joined Asher-Smith in the semis but Asha Philip missed out.

Shelayna Oskan-Clarke and Alex Bell echoed Philip in failing to make their final as they were unable to get past the 800m semis.

Steph Twell was 15th in the 10,000m as the title went to Holland’s Sifan Hassan.