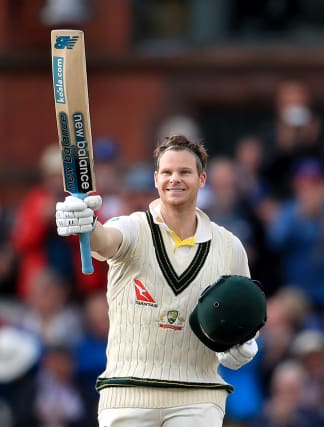 Steve Smith continued his remarkable run of scores against England with a double century in the fourth Ashes Test at Old Trafford.

Here, the PA news agency looks back at a fine sequence stretching back to the start of the 2017-18 Ashes series.

England already knew plenty about Smith heading into the series, the then captain having scored five previous hundreds against them, including 215 at Lord’s in 2015.

His first-innings ton at the Gabba helped set up a 10-wicket win.

A relative failure on this occasion but Australia still won by 120 runs.

A magnificent double century, and a brilliant 301-run stand with Mitchell Marsh, nullified hundreds from England’s Dawid Malan and Jonny Bairstow to set up an Australia victory by an innings and 41 runs.

Fell short of a fourth hundred in the series but Australia still won by a commanding innings and 23 runs.

Brilliant twin hundreds on his return to the side after suspension set up victory for Australia by 251 runs.

Again resisted England until being struck on the neck by a bouncer from Jofra Archer, who had earlier hit him on the arm, and was forced to retire hurt.

He later returned and hit three more boundaries but he missed the rest of the match – and the third Test at Headingley – after suffering delayed concussion.

Back after injury, Smith showed Australia what they had been missing with a dominant first-innings 211 that threatened to demoralise England.

He cracked 24 fours and two sixes in another imposing display, completely neutralising the threat of perceived nemesis Archer.

It was not a chanceless knock, however. He was dropped on 65 by Archer and had a remarkable let-off on 118 when he was caught off what proved a Jack Leach no ball.