Stokes revels in one of greatest innings of all time 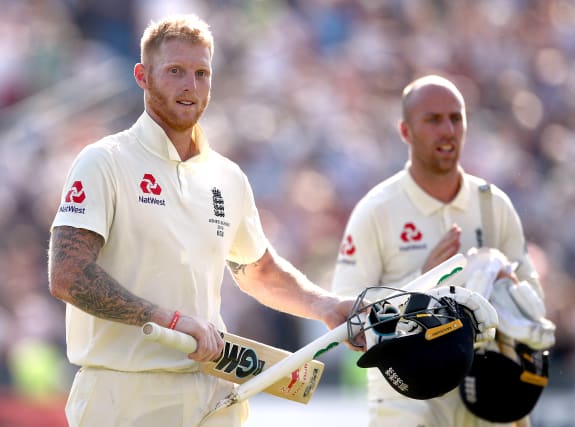 Headingley hero Ben Stokes revelled in one of the greatest innings of all time after coming up trumps in the fiercest of pressure situations once again to keep England’s Ashes dream alive.

Barely a month on from inspiring England to victory in the World Cup final, Stokes’ 135 not out ushered the hosts to a record fourth-innings chase of 359 with one wicket to spare in a nerve-shredding climax to the third Ashes Test.

Australia looked to be on the verge of retaining the urn after reducing England to 286 for nine but an unforgettable last wicket union between Stokes and Jack Leach – who contributed one in an unbroken 76-run partnership – altered the course of the series, at least for now.

No lesser authorities than Geoffrey Boycott, Michael Vaughan and Sir Alastair Cook were queuing up to hail Stokes’ knock as the best in history by an Englishman.

Stokes said: “I’m obviously over the moon that we’ve managed to stay in the series. We knew if we lost this game then the Ashes were gone.

“When a number 11 comes out needing 70 to win, I knew what I had to do in terms of the game situation. The only time I started to get a little bit nervous or panicking was when we got into single figures.

“To be sat here, especially after getting bowled out for 67 (in the first innings), to still be in with a chance of getting the urn back is an amazing feeling.

“Walking off there at the end when the whole of Headingley was standing up and celebrating was a very special moment and something I had to try to take in because moments like that don’t come along very often.”

Stokes, who admitted his day was “certainly close” to topping what happened at the World Cup, went to stumps on Saturday evening on two not out from 50 balls, as he and captain Joe Root defied Australia in a punishing final session.

Asked about what he did overnight, Stokes replied: “My wife and kids came down and they got there at around 10 o’clock. My wife walked into me eating pasta in my boxer shorts!

“Last night, I think had a knock-off Nandos and two bars of Yorkie biscuit and raisin. And a couple of coffees in the morning.”

Stokes started with circumspection on Sunday but gradually moved through the gears as he ran out of partners, teeing off once Leach was at the crease to finish with 11 fours and eight sixes.

There were two major slices of fortune towards a breathtaking finale as, first, Nathan Lyon fumbled the ball when Leach was backing up down the track with two runs required. He was sent back and only made his ground because the off-spinner could not cleanly gather the throw.

Stokes said: “I think Jack Leach must somehow have been watching Monty Panesar at Cardiff. I could not believe when I looked up. Me and Leachy could have had a conversation he was that close to me.

“That was huge panic stations there because he was so far out. Obviously in that pressure situations in games cam really affect what a human does. Nine times out of 10 Nathan Lyon would pick that ball up and take the stumps off.”

From the very next delivery, Stokes was rapped on the pad by Lyon but Australia’s desperate pleas for umpire Joel Wilson to raise his finger were ignored. Australia had burned their last remaining review in the previous over, meaning the decision stood.

Stokes added: “I knew it wasn’t out against Jack Leach. I have seen the DRS on my lbw shout, which obviously shows up with three reds, but DRS has got that completely wrong, as it flicked my front pad first and didn’t spin.

“It shows how crucial it is to make sure you use your reviews. When you get to a situation like that, you still need one.

“If they had one they would have used it and ended up winning. I still cannot believe it was three reds.”

Root described his deputy in glowing terms, with Stokes also taking three for 56 in Australia’s second innings during a tireless 24.2-over spell across two sessions only broken up by Jofra Archer’s four balls.

“He’s a bit of a freak to be able to, time and time again, produce match-winning performances like that,” Root said.

“He’s the ultimate team man, will do everything for every single player – that’s why he’s a brilliant vice-captain, he drags people with him. He stood up and that’s exactly what you want from your leaders.”

On levelling the series at 1-1, he added: “I’m going to struggle to put it into words and will for a very long time.”