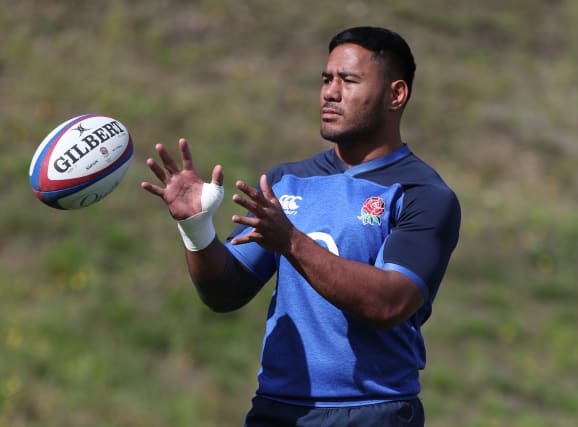 Manu Tuilagi has admitted hiding the early stages of the groin injury that almost ended his career back in 2014.

The England centre revealed he strapped himself up in secret and played through the pain for five games, keeping the injury from Leicester’s physios and coaches.

Tuilagi was applying tape to his groin and pubic bone like a belt until he felt a “loud pop” in a European match against Ulster that left him unable to walk.

The Samoa-born powerhouse won just two caps between 2014 and 2019 amid a catalogue of setbacks, and he even sought the services of a witch doctor to help end his injury curse.

Now fully fit and itching to flex his muscles as England inch toward the World Cup, the 28-year-old laid bare his folly in ignoring his body’s natural warning signs some five years ago.

“You just think, ‘I am never going to get injured’, even if it hurts you think, ‘I will be alright’; that is a lesson,” said Tuilagi.

“With my groin, I played five games with it being really painful. It was stupid.

“It was the start of the season in 2014. I pulled my adductor but I had no idea what an adductor felt like if you pulled it.

“I did it on the Thursday, played on the Saturday and strapped it up. I played five games with it and it went higher and higher into my groin.

“At one stage I started strapping my pubis. The physio was like, ‘What are you doing?’, I said, ‘Er, nothing’.

“I started strapping my pubis, which was just stupid. In the fifth game, I got the ball in the first 20 minutes, went to accelerate and bang, there was a pop, a loud pop and I just couldn’t walk.

“I had pretty much dislocated my pubic bone. I guess I wasn’t honest with the physios, but also I didn’t really know what it was. I didn’t tell the physios. I would say, ‘It is a bit sore’.

“It got to that point where you are running and trying to just take the pain.

“With injuries, you have to be honest. That is the best because if you’re not honest with the physio they don’t know how to treat you. That’s the biggest thing, trying to be honest as much as possible.”

Tuilagi could have almost doubled his 34 England caps but for his horrid run of injuries across the last five years.

The battering-ram centre tries not to dwell too much on those lost opportunities but is keen for others to heed this cautionary tale.

Asked how different the last five years could have been, Tuilagi said: “I ask that myself at times but I don’t regret anything. Whatever happened there has got me here now. Of course, it would have been different.”

Tuilagi now swears by regular meetings with Leicester’s sports psychologist and a more mindful warm-up routine, hoping both can pay a dividend at next month’s World Cup in Japan.

“We have a psychologist that comes into Tigers, he comes in every couple of months and I have about half an hour with him just speaking to him about how you get your body ready and rugby in general,” said Tuilagi.

“We talk about my game and that; that really helps me. The warm-up is important in terms of my mind and body. I need to get my mind right to go into contact but also knowing that my body is 100 per cent ready for it, especially now the game is so physical.

“I guess I take more time warming up and just go through the drills so that when I am going into training I can pretty much go full speed.

“Some things you can play through with pain, but if your body cannot function mechanically, that’s the big problem.

“I love being here with England now though, especially with this group of players. It’s something special that is happening here and for me, just being part of that is unbelievable.”