Neville excited ahead of ‘unbelievable two years’ for Lionesses 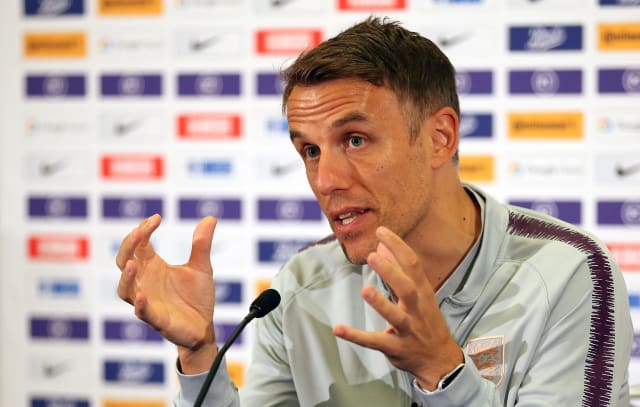 England boss Phil Neville has expressed his excitement about the two years that lie ahead after naming his squad for the forthcoming friendlies against Belgium and Norway.

The Lionesses, who came fourth at the summer’s Women’s World Cup, play their first fixtures since the tournament in France when they face Belgium in Leuven a week on Thursday and then Norway in Bergen the following Tuesday.

Manchester City duo Ellen White and Karen Bardsley both miss out through injury while club team-mate Jill Scott has been rested from the 24-player squad.

Defender Aoife Mannion who, like White, joined City over the summer after leaving Birmingham, is another elevated to the senior squad for the first time.

The other two new faces are goalkeeper Sandy MacIver, 21, and 20-year-old defender Anna Patten, who play for Clemson University and the University of South Carolina respectively.

England host the Euros in 2021, before which Neville is set to manage a Great Britain team at next summer’s Tokyo Olympics.

The 42-year-old, whose team lost 2-1 to the United States in the World Cup semi-finals, said at a press conference at St George’s Park on Tuesday: “It seems like yesterday we were playing in the World Cup I don’t think any of us have probably fully got over the emotions we have all been through.

“So this camp will be about resetting our mindset for what will be an unbelievable two years for the Lionesses.

“We have done an extensive debrief, an extensive look at where we need to improve and the results are that we are really close, and it’s now making the small minor adjustments that I believe will take us to that next level.

“The next two years are really exciting and from the minute I landed back in Birmingham when we got back (from the World Cup) my thoughts went to how do we win the next Euros, how do we get through a semi-final, how do we get these players up to the level that will get us that gold medal we all want?”

He added: “I’ve got two years to build a team that will win the Euros in 2021, that’s the aim. There is going to be no excuses. I know what we have to do, and it starts on Sunday night when they meet up.”

Nineteen of the 23-player squad that was in France have been called up this time – the other player who does not feature is now-retired midfielder Karen Carney.

Neville said midfielders Izzy Christiansen and Jordan Nobbs, who have both been recovering from injury, had been “close” to being recalled for this squad.

And regarding White – joint top-scorer at the summer’s Women’s World Cup with six goals – and Bardsley, he said: “They’re probably going to be out for a couple of camps, both of them.

“Karen missed the semi-final and the third-placed game (the 2-1 loss to Sweden) with a hamstring injury, and it’s going to take longer than we expected to clear up. Ellen got injured in training for City last week.

“We’re hoping that they’re both going to be back for the Wembley game in November, but we’re not going to take any risks.”

England take on Germany in a friendly at Wembley on November 9, for which more than 60,000 tickets have been sold.

The current record for the biggest-ever attendance for a Lionesses home game is the 45,619 that watched the 3-0 loss to Germany at the same stadium in November 2014.

“We want to fill Wembley stadium and send a real message for women’s football worldwide.”