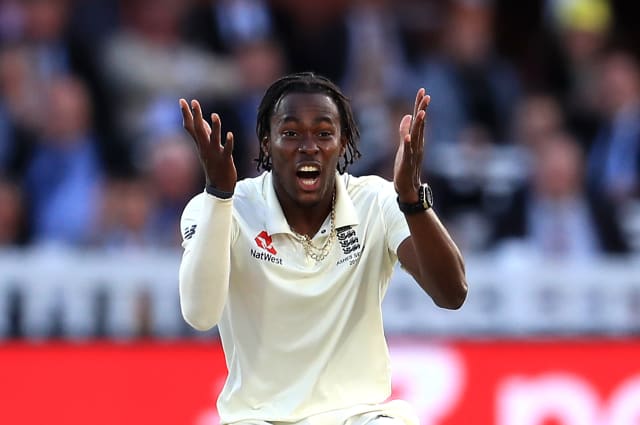 Jofra Archer's latest spell of thunderous fast bowling narrowly failed to deliver an Ashes-levelling victory at Lord's but England captain Joe Root believes the debutant has reset the course of the series.

England made a bold push on day five of the second Specsavers Test, declaring 266 ahead after Ben Stokes' unbeaten 115 and then reducing the tourists to 154 for six in a tense final session.

Just as he had been in the first innings Archer was at the centre of things again, taking three for 32 and sending down a number of ferocious deliveries at more than 90 miles per hour.

Archer had already forced star batsman Steve Smith to withdraw from the match with a delayed concussion caused by a 92mph bouncer to the neck on Saturday, and landed another frightening blow that smashed Marnus Labuschagne square in the grille.

Labuschagne was on the field as Smith's concussion substitute, Test cricket's first, and went on to top-score with 59.

Root did not demur when it was suggested that Archer might have the same kind of influence as Australia's Mitchell Johnson, whose express speed saw him claim 37 wickets in the 2013/14 edition.

"Potentially. He's come in and he really has made a massive impact, added a different dynamic to our bowling group and has given Australia something different to think about," said Root.

"It's really pleasing to see someone come in on Test debut and really shake up things and live up to the hype – even some of the hype that he put on himself.

"He makes things happen when not many others in world cricket can. Such a unique action and way of bowling, and obviously natural pace, which is always going to be in the game on any surface.

"When you've got that and the skill of other guys around, it makes for a tasty combination and I think that's one of the reasons why we always felt we were in the game tonight and always felt we could get a result right to the end there. It makes for a very interesting last three games."

England will name their third Test squad on Monday morning, with the injured James Anderson (calf) expected to be absent again but potential additions to the fragile batting line-up.

For Australia the biggest issue now surrounds whether or not Smith takes the field in Leeds on Thursday.

That would be just four days after being diagnosed with a head injury, a worryingly brief turnaround given the nature of his exit from the last match.

Smith has already said he will aim to play in the game provided he gets the green light from Cricket Australia's medical team, led by the specialist doctor Richard Saw.

A Cricket Australia statement released on Sunday evening read: "Steve Smith had a precautionary scan of his neck on Sunday which, as expected, cleared him of any structural damage.

"After the scan Steve returned to the team hotel to rest and he will continue to be reviewed on an ongoing basis."