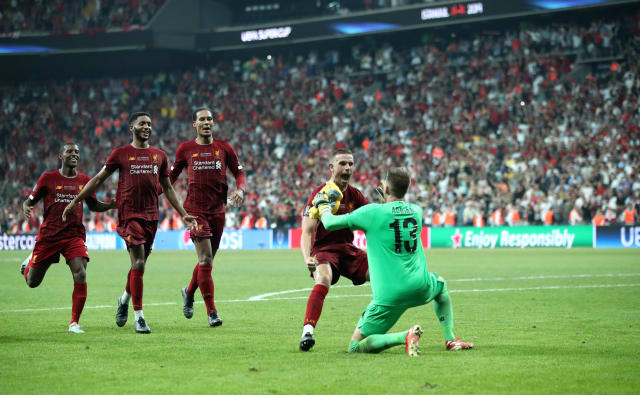 Liverpool goalkeeper Adrian is doubtful for Saturday’s Premier League meeting with Southampton after a pitch invader fell on his ankle while celebrating the club’s Super Cup victory in Istanbul.

The Spaniard was in the Reds’ goal as cover for Alisson Becker, who is currently injured himself.

Here, PA looks at other sportsmen who have suffered unusual injuries.

England batsman Roy missed Surrey’s crucial Vitality Blast game against Glamorgan in August 2018 – and he had only himself to blame. Roy threw a cricket bat in frustration following his dismissal in Surrey’s victory against Hampshire but did not account for the bat bouncing and hitting him in the face, later calling it a “moment of stupidity”.

Wales hooker Baldwin sat out the Ospreys’ PRO14 defeat against the Cheetahs in September 2017 because of a lion bite. The then 29-year-old was absent from the 44-25 loss after he was injured while attempting to stroke the caged animal at a game lodge in Bloemfontein. He later said he had needed four operations and was told he could have lost his hand.

South Africa were forced to issue a late SOS the night before their third Test against England in January 2016 after wicketkeeper De Kock slipped and twisted his knee while walking his dog. The injury worsened overnight, prompting a late call-up for Dane Vilas. And while De Kock might want to forget the nature of the injury, South Africa will also want to forget the result after losing by seven wickets, which handed England the series.

Coventry goalkeeper Burge trained with a bandage on his head after he was struck by a puck while watching ice hockey last September. The then 25-year-old reportedly needed hospital treatment after being hit while he watched the Coventry Blaze’s Elite League clash with the Sheffield Steelers.

Australia paceman McGrath turned his ankle ahead of the second Ashes Test in 2005 when he stepped on a stray cricket ball during a warm-up game of touch rugby. He missed the Test which England won in thrilling fashion to level the series at 1-1. England would go on to take the series 2-1, winning again at Trent Bridge – another match McGrath missed through injury.

Rooney, then captain of England and Manchester United, caused controversy in 2015 when a video emerged of him boxing in his kitchen with former team-mate Phil Bardsley. A blow from Bardsley floored Rooney, who fell backwards on to the floor. After the video was aired, Rooney celebrated a goal against Tottenham by shadow boxing and then pretending to hit the deck. “I was in a house with some friends. Obviously I was caught on the wrong end of a punch, but I wasn’t knocked out like it was reported,” Rooney said.

Norway defender Grondalen, who played for his country from 1973 to 1984, probably had no concerns about his safety when he put on his running shoes and stepped out for a training run. However, while out jogging he collided with a moose and was forced to withdraw from an international as a result.

McIlroy suffered a “total rupture” of his left ankle nine days before the 2015 Open Championship at St Andrews, forcing him to withdraw. The defending champion posted a picture on his Instagram account of him wearing a protective boot on his left leg after, in his own words, “a soccer kickabout with friends on Saturday”.

Former England goalkeeper James was never afraid of standing out from the crowd, but he brought himself unwanted headlines when he injured his shoulder while out fishing, causing himself pain when he tried to land a monster carp. Some of James’ injuries were not caused by other sports, though, for he once pulled a muscle in his back when reaching for the television remote control. James will be appearing on the 2019 series of Strictly Come Dancing – what could possibly go wrong?

Ryder Cup star Donaldson suffered a severe finger injury following a mishap with a chainsaw in January 2016. The Welshman, who claimed the decisive point as Europe defeated the United States in September 2014, posted a graphic photo on Twitter of what seemed to be a laceration to the little finger on his left hand. Above the image, he wrote: “So folks in my time off decided to have a fight with a chainsaw and lost! Oops!!”

The Real Madrid forward missed a Champions League game due to an infection caused by shaving his legs. Boss Zinedine Zidane told reporters ahead of Real’s 3-0 victory over APOEL Nicosia in September 2017 that Asensio would not feature because of a pimple which prevented him from pulling up a sock.

Frampton was forced to pull out of a fight against Emmanuel Dominguez this month after suffering a hand injury in what he described as a “freak accident”. The Belfast boxer, who was due to face Mexican Dominguez in Philadelphia, said a large ornament had fallen on his left hand in a hotel lobby, fracturing his fifth metacarpal.