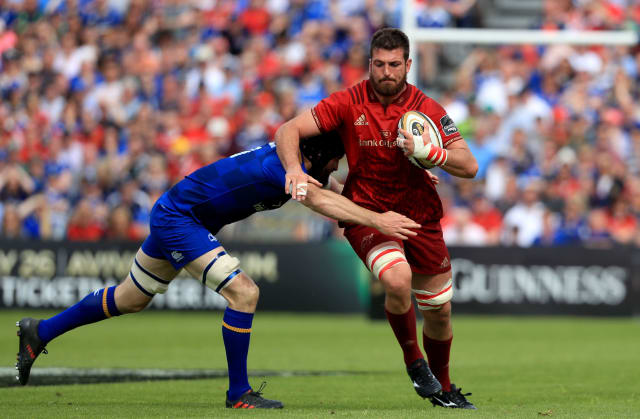 Munster lock Jean Kleyn will make his Ireland debut against Italy on Saturday – just two days after qualifying on residency.

The 25-year-old joined Munster from the Stormers in his native South Africa in 2016, and completed his three-year residency qualification on Thursday.

Now the combative second-rower has the chance to state his World Cup case as Ireland take on the Azzurri in their first warm-up match for Japan.

Kleyn is battling for the likely final lock berth and will partner dependable Leinster star Toner at the Aviva Stadium this weekend.

“Everyone took to him straight away, he’s acquitted himself very well,” said Farrell.

“Hopefully we’re able to see his point of difference.

“First of all he knows he has to fit into a strategy. But he’s also, within that, got to play his game and bring his best to the table.”

Leinster flanker Rhys Ruddock will captain a much-changed Ireland line-up from their Six Nations exploits, with boss Schmidt handing a host of fringe players a chance to impress.

Former Sale full-back Mike Haley could make his Test debut off the bench, with Jordan Larmour taking the first chance in these warm-up matches to prove his credentials at 15.

Joey Carbery starts at fly-half with Johnny Sexton continuing to recover from a thumb complaint, with Leinster’s Luke McGrath at scrum-half.

Munster flanker Tommy O’Donnell will win his first cap since March 2016, with Jordi Murphy slotting in at number eight.

Wing Dave Kearney features for the first time since November 2017, further underscoring Schmidt’s determination to hand out the opportunities.

Head coach Schmidt has returned to his native New Zealand this week following a family bereavement.

Farrell confirmed Schmidt will be back in Ireland come the weekend, but admitted it is yet to be determined which coach will take charge on Saturday.

Asked if he or Schmidt will lead Ireland on Saturday, Farrell said: “That’s up to Joe, so we’ll see.

“Joe will be back in the country soon and will be in and around the set-up at the weekend.

“Obviously it’s unfortunate circumstances. I didn’t think I’d be here reading the team out on a Thursday, because that’s Joe’s job.

“But it’s been fine, we’re following the plan we’ve always followed all the time under Joe.”