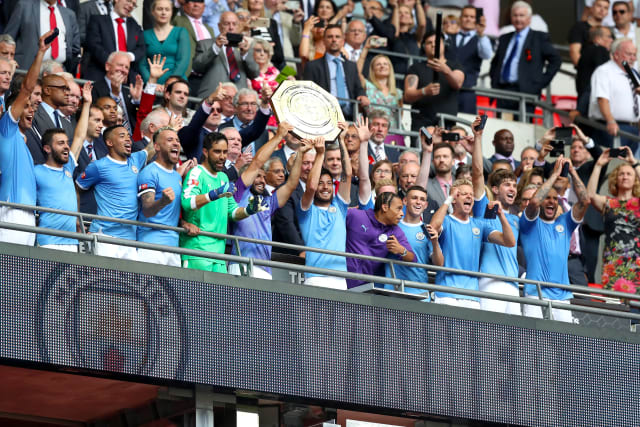 Manchester City boss Pep Guardiola expects “many, many contenders” for the Premier League title after edging past Liverpool to lift the Community Shield.

Guardiola admits there remains little between the two teams after securing a 5-4 penalty shoot-out success at Wembley, but expects other teams to be involved in the battle for the league this term.

“I don’t know if it will be like last season, two real contenders – Liverpool and us – to win the Premier League,” said Guardiola.

“I think United with (Harry) Maguire and the other players they bought, Arsenal as well, and Chelsea, and Tottenham that they won all the pre-season so I think there will be many, many contenders this time.

“They (Liverpool) are a top-class team and the difference is one point ahead and one penalty ahead, that is the difference. It’s minor.

“Sometimes the coin can come on your side, sometimes it cannot so that is why it’s good to face them to see how well prepared we have to be to try to win the title.”

City, who handed a debut to £62.8million club record-signing Rodri at the national stadium, have had a fairly quiet summer in the transfer market and look to have missed out on England defender Maguire.

The Leicester man is on the verge of completing his move to Old Trafford for around £80million, and Guardiola claimed his club could not compete financially with their neighbours.

“We were interested but we could not afford it. United afforded it.

“He’s an excellent player, he made an incredible World Cup, he’s strong in the air, good with the ball in the build up and he’s so fast.

“Congratulations for United for this signing.”

Both sides’ pre-season preparations have been disrupted by players arriving back late for training due to being involved in the Copa America or Africa Cup of Nations.

City were without Fernandinho and Riyad Mahrez and left Sergio Aguero on the bench because of international commitments, while Sadio Mane was absent for Liverpool.

Guardiola, who played down the severity of an early injury suffered by Leroy Sane, feels the current footballing calendar is “not normal” and believes it should be looked at by the authorities.

“They don’t listen to the players, the managers, what is the best to protect, especially the players. Because at the end of the day I don’t play, I can be every day being a manager and having a game, I don’t run, but for the players they should consider it.”

European champions Liverpool grew into the game and had the better of the second half, with Mohamed Salah particularly wasteful in front of goal.

Reds boss Klopp, who agreed with Guardiola that the schedule is too punishing for players, was pleased with the overall display of his side.

“Football-wise, the second half was just really, really good, the best way you can play against City,” said the German.

“They are in the early stages as well, they will be in a different shape in a couple of weeks, for sure.

“But having this amount of chances we had today is a very good sign for us, absolutely.

The key issues as handball decisions come under scrutiny

Is home advantage a thing of the past without crowds?