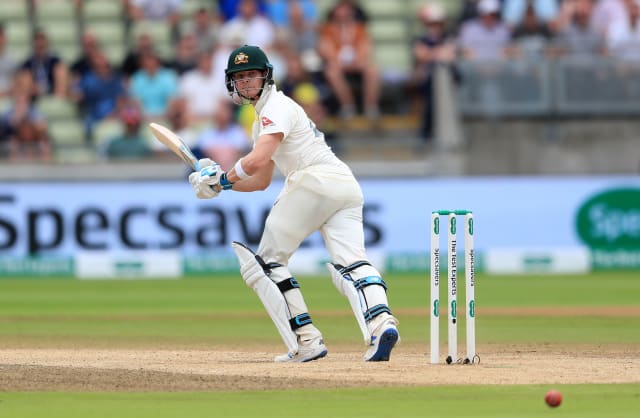 Steve Smith completed a majestic return to Test cricket with his second century in the Ashes opener at Edgbaston leaving England scrapping to salvage a result.

Smith, back in the Baggy Green 16 months after being banned for his role in the sandpaper scandal, followed a brilliant 144 on day one with an equally fine 142 on day four to become just the fifth Australian to hit twin hundreds against England.

Where the first rescued his side from the cliff edge at 122 for eight, the sequel helped set a monstrous target of 398. Matthew Wade also left his mark on the home team, chiming in with a fluent 110 before the declaration came at 487 for seven.

The more realistic task in front of England was to bat right through for a draw, with first-innings centurion Rory Burns and Jason Roy successfully navigating seven overs before stumps. They and their nine team-mates must collectively see off another 90 on day five, on a pitch offering plenty of turn for Nathan Lyon, to head to Lord’s all square.

England’s attempts to escape with a draw are unlikely to be aided by the weather. According to the Met Office, any early morning showers should clear up before the start of the first session while there is only a 10 per cent chance of rain during the hours of play. Those in attendance for day five will bask in afternoon sunshine with temperatures set to peak at 21 degrees.

Smith may have seemed ubiquitous during both of Australia’s innings but Rory Burns has the distinction of batting on all five days in Birmingham. Only three other Englishmen have done it before: Geoffrey Boycott, against Australia in 1977, Allan Lamb, against the West Indies in 1984, and Andrew Flintoff, against India in 2006.

Smith became the fifth Australian in history to compile hundreds in both innings of an Ashes Test – and first since Matthew Hayden did so in Brisbane in 2002. In following Warren Bardsley, Arthur Morris, Steve Waugh and Hayden into the record books, Smith has laid down the gauntlet for the remainder of the series in his first Test since the ball-tampering scandal. This is the sixth successive time he has passed fifty against England, who need to rip up the script and formulate some new plans or this contest could go the same way it did in 2017-18.

Ball in a pint pot

As James Pattinson and Pat Cummins went to town on a desperately flagging bowling attack – this felt like the day James Anderson’s absence was truly felt – England’s attempts to get the ball changed were accepted in bizarre circumstances. Pattinson bludgeoned Stuart Broad over the midwicket boundary and straight into a spectator’s pint.

Wade moved to his first Test hundred in more than six years when he middled a reverse sweep off the part-time off-spin of Joe Root. This is the recalled 31-year-old’s first Test since September 2017 and, after making a single-figure score in the first innings, this knock will go a long way towards cementing his spot in the middle order.

This felt like a big day in the Test career of Moeen Ali. On a pitch offering lavish turn, Moeen bowled two moon balls but also spun one wickedly through the gate of Tim Paine. It was a rare moment of joy for England’s premier off-spinner, who neither offered control nor routinely threatened. Figures of two for 130 from 29 overs means his place for the remainder of the series will come under scrutiny.