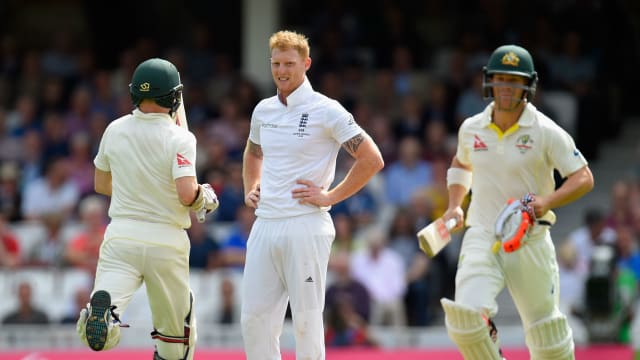 Ben Stokes has no doubt the Ashes will bring out Australia's true competitive edge, despite their apparent bid to cultivate a more wholesome image.

The first Test begins at Edgbaston on Thursday as England seek to follow up their Cricket World Cup success by regaining the urn.

That ODI triumph on home soil included a semi-final win over an Australia side who appear eager to mend bridges after the ball-tampering scandal that rocked the sport.

But Stokes, who missed the 4-0 series loss in Australia last time out, is expecting the niceties to fade under the intense heat of the two nations' long-standing rivalry.

"It is weird Aussies trying to be nice to you," he said in quotes reported by The Guardian.

"I think once you get out in the middle and cross the white line, the real competitive side of both teams will come out and Ashes are the biggest Test series played in the world.

"There is always something that happens between teams in Ashes series and I don't think this will be any different.

"I think that first morning of any series is when you want to stamp your authority as a team with bat and ball.

"Getting off to a good start can make it flow throughout the series."

@benstokes38 has been reappointed as our vice-captain for the #Ashes

David Warner was one of the Australia players implicated in the ball-tampering affair and Stokes, who was pivotal in England's World Cup success, knows it will be important to limit the destructive batsman's impact.

"He is a player who can take games away from you," added Stokes, who will serve as vice-captain and averages 33.89 with the bat and 31.92 with the ball in Tests.

"He is a phenomenal batsman and very dangerous opener, so to tie him down and not let him establish his authority against us would be a really big plus.

"We don't want to give anything away to any of their batsmen. We want to let them know we are here to be serious and everyone in the changing room is desperately trying to get that urn back because it's not good them having it."