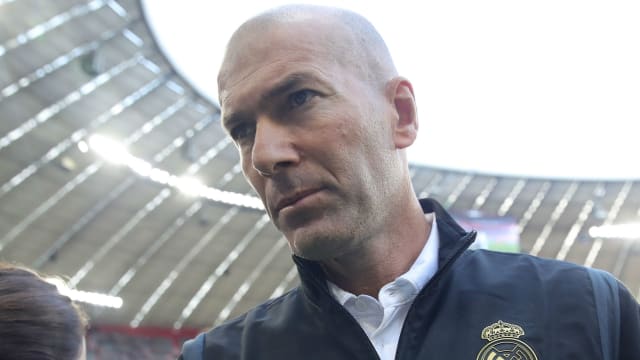 Gareth Bale did not travel for Real Madrid's participation in the Audi Cup on doctor's advice, according to head coach Zinedine Zidane.

Madrid suffered their third defeat in four winless pre-season outings at the Allianz Arena on Tuesday – Harry Kane giving Tottenham a 1-0 triumph that would have been far more comfortable but for the heroics of goalkeeper Keylor Navas.

Bale is not part of the squad taking part in the exhibition tournament but looks increasingly likely to remain under Zidane's charge after a prospective move to Chinese Super League side Jiangsu Suning collapsed over the weekend.

"Bale did not travel as he was not feeling good," the Madrid head coach told reporters afterwards.

"Speaking with the doctors it was better to stay in Madrid and train there. That's it. It's a decision taken together, speaking with him. That's it."

Bale was on target in the 2-2 draw against Arsenal that remains Los Blancos' only positive result in their preparations for the 2019-20 campaign – though he missed his spot-kick in the 3-2 penalty shoot-out victory that followed.

Zidane was also unwilling to offer any clarity on James Rodriguez's future – another player apparently surplus to requirements under the Frenchman – but is unperturbed by the poor form of those who are part of his plans.

"I always think positively," he said. "I know it is difficult, we are coming off a tough season and Madridistas might not think it but we have a great team.

"We are not ready yet but we will pick up confidence and play and come out of this. We just need to win a game."

Navas' performance was one of few highlights for Madrid as he made a string of excellent saves either side of Kane's goal in the first half.

Thibaut Courtois suffered a sprained ankle as he shipped five first-half goals in the 7-3 loss to Atletico Madrid in New Jersey.

The Belgium international's previously expressed certainty that it was "clear" who the Madrid number one would be this term no longer looks so well placed.

"Keylor played a great game, that's it," Zidane added. "What Thibaut said [about being number one] we'd have to see.

"There are no automatic starters here. We're all in the same team, and all must be prepared."