Ronaldo: I think Neymar will stay at PSG 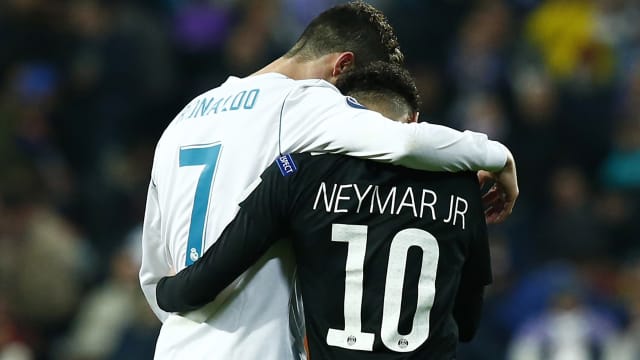 The Brazil forward has been at the centre of transfer rumours since telling Thomas Tuchel he wanted to leave PSG prior to the Copa America.

LaLiga champions Barca have reportedly offered €100m plus two first-team members in an attempt to re-sign the 27-year-old two years after his departure for France.

Yet the Portugal legend believes Neymar is most likely to remain at Parc des Princes.

Ronaldo told Marca: "I don't know. He's a great player and I get along with him very well. There is a lot of talk about him, for Madrid, Barca, Juve.

"It is the job of the press, because you have to sell papers, but I think he will stay in Paris and, if not, look for where he is happy and where he can express his football.

"I hope he will avoid injuries, because he has had a lot of them and that must worry him.

"I worry because I like to see the boy playing. Regardless of where he plays, [it is important he] takes care of himself and has no injuries. That's what I want for him."

The 34-year-old is now heading into his second season in Turin and first under new boss Maurizio Sarri, who has promised to afford the talismanic attacker freedom to roam the pitch.

Ronaldo, though, insists that he will not neglect his defensive duties as the Bianconeri chase silverware at home and in the Champions League.

"I will do the same thing I did in Madrid or in my first year at Juve or for Portugal: I will defend and close spaces," he said

"I'll be an attacker with freedom but I have to work defensively because only with everyone involved can a team win important things."