Pochettino: Transfers not in my hands 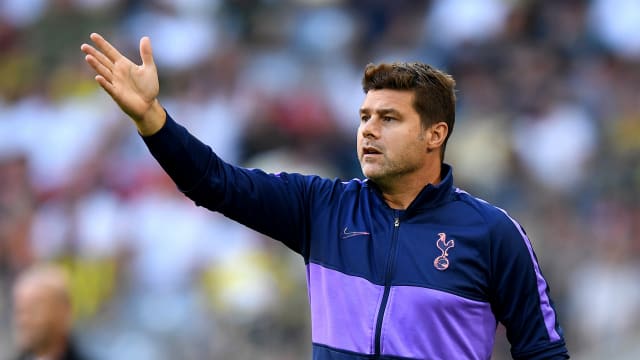 Mauricio Pochettino has reiterated he does not control Tottenham's transfers and suggested his job title at the club should change.

Pochettino, who led Spurs to the Champions League final last season, was first team coach for his first two years at the club but when he signed a new deal in 2016 his role changed to manager, which typically includes involvement in transfer business.

He has regularly shown signs of frustration at Tottenham's activity in the market, over which chairman Daniel Levy has the final say.

January arrival Lucas Moura was the north London club's only signing in 2018, although they have broken their transfer record to bring in Lyon midfielder Tanguy Ndombele.

The former Lyon midfielder is the only fresh face in Tottenham's squad for 2019-20 at this stage, with Leeds United winger Jack Clarke remaining at Elland Road on loan after joining Pochettino's side.

Despite the lack of business, Tottenham impressed in Tuesday's 1-0 Audi Cup defeat of Real Madrid, while they have also beaten Serie A champions Juventus in pre-season.

Pochettino, though, has again indicated he is dissatisfied with Tottenham's lack of signings, with the club continuing to be linked with a move for Real Betis midfielder Giovani Lo Celso.

"I need to repeat in the past few press conferences what I told your colleagues in England," he told reporters. "I am not in charge and I know nothing about the situation of my players. I am only coaching them and trying to get the best from them.

"These type of things will happen or not happen. Sell, buy players, sign contract, not sign contract. I think it is not in my hands, it's in the club's hands and in Daniel Levy's. At the moment I am managing the team the best way possible.

"I told you [the media] before I am not in charge about the individual situations. Of course, I am the boss deciding the strategic play, training, mentology and philosophy are my areas, but in another area I don't know. Today, I feel like I am the coach."

Asked if he should have more say in transfers, Pochettino added: "It's difficult to talk like this but I think it's not in my hands.

"Only I describe the situation of what happens and I think it's important for the players and people to know that I am going to be, like I told you before, that I will be happy with the squad that the club are going to provide to me. Of course we will give our best.

"My mood is always the same and my emotional balance is always similar. I am emotional, but I am a person like everyone that thinks a lot. I only describe the situation to make clear that, if you have some question, I am not the person that is going to [be able to] answer what you want."

Spurs play Bundesliga champions Bayern Munich in the final of the Audi Cup on Wednesday, with the Premier League's transfer window closing on August 8 ahead of the new season getting under way.