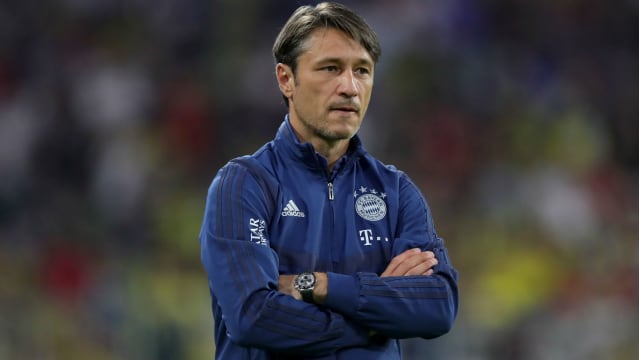 The Bundesliga champions have made no secret of their desire to bring the 23-year-old to the Allianz Arena after he appeared to fall out of favour at the Etihad Stadium towards the end of last season.

Although City's reported £90million asking price is said to have initially put Bayern off, Kovac recently suggested an agreement could soon be reached, saying: "I am very confident. I assume we can get it [done]."

Bayern chief executive Karl-Heinz Rummenigge, however, revealed his frustration at Kovac's comments ahead of the Bavarian giants' thumping 6-1 Audi Cup win over Fenerbahce on Tuesday, telling ZDF: "I did not like what he said."

The message has clearly got through to Kovac, who revealed after the game at the Allianz Arena that he has spoken to Guardiola and apologised for speaking publicly about his player.

He told ZDF: "We [Bayern and him] talked about it. Maybe I was too offensive in that interview. I talked to Pep and apologised because of it.

We'll square off with @SpursOfficial in the final tomorrow #AudiCuppic.twitter.com/r1mKZRMAwx

"I would like to apologise to the club, too. I will restrain myself in cases like this in the future."

Bayern were in fine form against their Turkish opponents, racing into a 5-0 lead at the break thanks to goals from Renato Sanches, Leon Goretzka, Kingsley Coman and two from Thomas Muller.

World Cup winner Muller completed his treble in the second half as Bayern booked their place in the final against Tottenham, who beat Real Madrid earlier in the day, on Wednesday.

Muller was introduced in the 20th minute for Serge Gnabry, who appeared to be limping as he went off, but Kovac has confirmed that his withdrawal was merely precautionary.

"Nothing happened to Serge," he explained. "He got a bit tight on his right thigh. It was just a precaution."