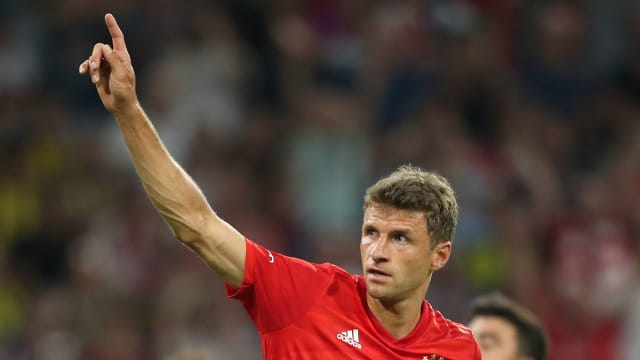 Thomas Muller plundered a hat-trick as Bayern Munich romped to a 6-1 Audi Cup win against Fenerbahce at the Allianz Arena on Tuesday.

Niko Kovac's side were in ruthless mood against their desperately poor Super Lig opponents, with Renato Sanches, Leon Goretzka and Kingsley Coman adding to Muller's treble.

Max Kruse gave the visiting support something to cheer with a 64th-minute consolation strike, but it did little to take the shine off a consummate attacking performance by the reigning Bundesliga champions.

Bayern – who face Borussia Dortmund in the DFL-Supercup on Saturday – will take on Tottenham in the final on Wednesday, while Fenerbahce will have to pick themselves up for a third-place tie against Real Madrid on the same day.

Sanches got Bayern on their way after 22 minutes, sliding into an empty net after being teed up by Robert Lewandowski.

Make that  more for @esmuellert_!

That was followed six minutes later by a second, Goretzka driving into the penalty area to meet Coman's cutback with a low, right-footed strike from 12 yards.

Muller – who had been introduced for the injured Serge Gnabry after 20 minutes – made it three in the 31st minute after picking Nabil Dirar's pocket just eight yards out and slotting past a helpless Harun Tekin.

The Fener goalkeeper picked the ball out of his net again five minutes before the interval when the impressive Coman slotted underneath him after Lewandowski's pass was fortuitously deflected into his path.

Vedat Muriqi flashed narrowly wide at the other end but normal service was resumed in the 44th minute, Muller adding his second from the penalty spot after Lewandowski was hauled down by Mauricio Isla.

Muller completed his hat-trick in style shortly before the hour mark, superbly controlling Niklas Sule's long ball with his heel and firing past Tekin, who had inexplicably raced off his line, from 35 yards.

Bayern eased up after a raft of substitutions, allowing Kruse to run at their defence and fire past Sven Ulreich from the edge of the penalty area for the most inconsequential of goals.

It still appeared to be too much for Dirar, who seemingly had to be prevented from walking off the pitch with 20 minutes remaining by his coach Ersun Yanal and a number of team-mates.