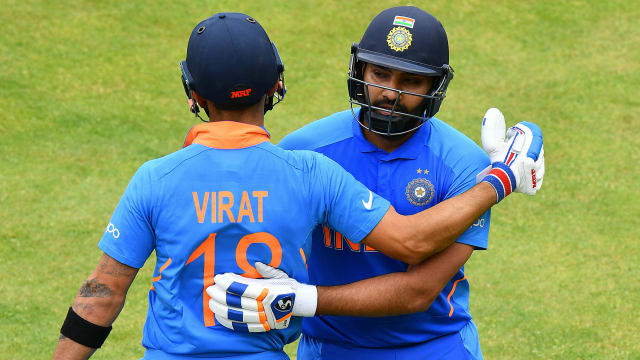 Virat Kohli has offered a strong response to reports he has fallen out with India vice-captain Rohit Sharma, insisting "we have had no issues".

There has been speculation over a rift between Kohli and his deputy Rohit since India were beaten in the Cricket World Cup semi-finals by New Zealand.

However, Kohli repeatedly described such stories as "baffling", "ridiculous" and "disrespectful" as he addressed the media on Monday.

The India skipper insists he has a good relationship with Rohit and the rest of his team-mates, questioning the reason for such reporting, given a lack of evidence.

"In my opinion, it is baffling, to be honest," he told a news conference. "It is absolutely ridiculous to read such stuff.

"I have been to public events and the public says to me, 'We have so much respect for you'.

"We are feeding off lies, we are overlooking facts and we are turning a blind eye to all the good things that have happened, creating fantasies and scenarios in our heads, wanting to accept this is the truth.

It is baffling to read (reports of an alleged rift). We are feeding off lies, overlooking facts & turning a blind eye to all the good things that have happened. It is disrespectful: @imVkohlipic.twitter.com/gl9oPm8veE

"It's bizarre that people are creating this on the outside. It baffles you as a leader, as a coach, as a team when lies are being floated around and are being made to look like they are believable. It's actually very disrespectful, to be honest."

Kohli added he does not understand who would benefit from claims that would do more harm than good to Indian cricket.

"If I don't like a person or if I'm insecure with a person, you will see that on my face or in my behaviour to a person - that's how simple it is," he continued.

"I have always praised Rohit whenever I have had an opportunity because I believe he is that good. We have had no issues. As I said, it's baffling, to be honest.

"I don't know who is benefiting from all of this. We here are living, breathing, working towards getting Indian cricket to the top. And here there are people who get some kind of pleasure in bringing it down.

"I don't understand how that works. You work hard for four years to bring a team from seven to one [in the world rankings], and after four years, what are we talking about?

"Within the team, it's for everyone to see our camaraderie and friendship - and it's evident on the field. You can't play with that kind of passion if people don't get along with each other. It's as simple as that.

"It's baffling and it's time we focus on bringing Indian cricket forward and not on things that are not even there at the moment."