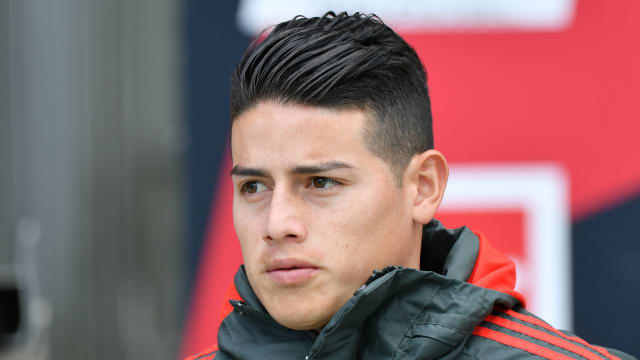 James Rodriguez's hopes for another chance at Real Madrid have been boosted after he took part in the club's 2019-20 pre-season training for the first time on Tuesday.

After spending the past two seasons on loan in the Bundesliga with Bayern Munich, James had looked set for a permanent departure from the LaLiga giants during the off-season, with Napoli and Atletico Madrid heavily linked with moves for the 28-year-old.

Napoli coach Carlo Ancelotti has been open about his desire to sign James, with whom he has worked during previous spells in charge of both Bayern and Madrid.

However, a long-term injury to Marco Asensio and a thumping 7-3 friendly defeat to Atleti on Saturday appear to have convinced Zinedine Zidane to keep the Colombia international at Madrid.

James missed Los Blancos' tour of the United States after featuring at the Copa America but played a full part in training, while Gareth Bale worked separately from his team-mates.

The Wales international's proposed move to Chinese Super League side Jiangsu Suning collapsed on Sunday and he now looks set to stay in Madrid, unless a deal can be done elsewhere.

Madrid also confirmed striker Luka Jovic trained indoors after his collision with Jan Oblak during the defeat to their city rivals.

The 21-year-old, who has joined from Eintracht Frankfurt, was forced off after 30 minutes but has seemingly not sustained any lasting damage.

New left-back Ferland Mendy and Brahim Diaz were Madrid's other injury absentees along with Asensio, who is expected to miss much of the coming campaign having ruptured his knee ligaments.