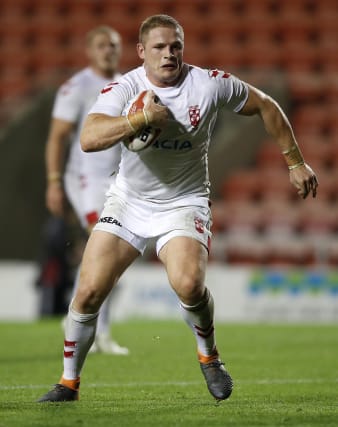 Wigan have pulled off a major coup with the signing of England prop forward George Burgess on a three-year deal.

The 27-year-old younger brother of Sam will link up with the Warriors at the end of the season, when his current contract with the South Sydney Rabbitohs expires.

Burgess, who is serving a nine-match ban for eye-gouging, was told by Souths his contract would not be renewed but he was not thought to have been short of offers and his capture was described by Wigan chairman Ian Lenagan as a clear statement of intent.

Unlike his three brothers, Burgess has never played in Super League, having opted to make the move to the NRL at the age of 18, while still in the juniors at Bradford.

Wigan executive director Kris Radlinski said: “We are thrilled to have secured the services of one of the most recognisable players in world rugby league.

“The Burgess boys transcend sport so for us to have secured the services of George for the next three years is a major coup for Wigan and for the Betfred Super League.

“For such an important signing, it didn’t take long to finalise the deal once we set out the vision for our club and the role that George will play.

“Now, with our head coach in place and our recruitment complete, we can plan to make 2020 a memorable Wigan season.”

Burgess, who has won 15 caps for England, will join Jackson Hastings, Mitch Clark, Jake Bibby and Bevan French and complete the Warriors’ recruitment for 2020.

“He is respected highly by his peers in the NRL and at international level and his experience, leadership and physicality will be of real benefit for us moving forward.

“I’m looking forward to welcoming him into the group next season and working with him.”

Burgess said: “After speaking to Adrian Lam and Kris Radlinski, it’s clear to me that there’s something special happening at Wigan Warriors in 2020 and beyond.

“Although it’s a huge decision to leave the NRL and say goodbye to Souths, I’m excited as to what the future will hold at Wigan Warriors and the Betfred Super League.”

Burgess received an offer from Parramatta earlier in the season but his reputation, along with his value, took a hit when he was found guilty for the second time in his career of gouging.

Sam and twin Tom remain contracted to Souths until the end of 2023 while older brother Luke brought his career to a close with Salford at the end of the 2018 season.