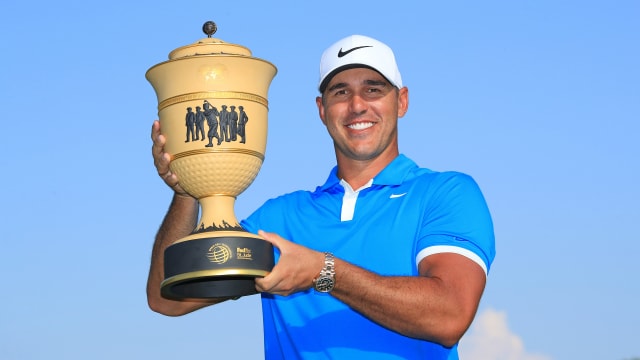 World number one Koepka celebrated a three-stroke victory after carding a five-under-par 65 in Memphis on Sunday.

Koepka – a four-time major champion – enjoyed a flawless final round with five birdies, including three in a four-hole stretch at TPC Southwind.

The American star and FedEx Cup leader finished 16 under overall for his third win of the season and seventh of his career, ahead of countryman Webb Simpson (64).

It's his seventh PGA TOUR title.#LiveUnderParpic.twitter.com/pWyxyao4oD

Simpson's round was highlighted with an eagle on the par-five third hole but a bogey just before making the turn sullied his scorecard.

Australian Marc Leishman, who also climbed up the leaderboard, rounded out the top three at 12 under after his final-round 67.

Overnight leader and former world number one McIlroy ended the tournament five shots off the pace following his one-over-par 71.

Only 5 players have won a major and WGC in the same season.

McIlroy – who won the tournament in 2014 – was the man to beat following the third round after he posted an eight-under-par 62 for a one-shot lead ahead of Koepka.

But the 54-hole leader was unable to maintain his charge after missing the cut at The Open last week – McIlroy falling victim to two bogeys on his back nine as he finished alongside Tommy Fleetwood (66) and Matthew Fitzpatrick (69).

Defending champion Justin Thomas had to settle for a share of 12th position at six under following his final-round 71.

Meanwhile, Dustin Johnson – the 2016 champion – ended the event a stroke further back after shooting a two-under-par 68.