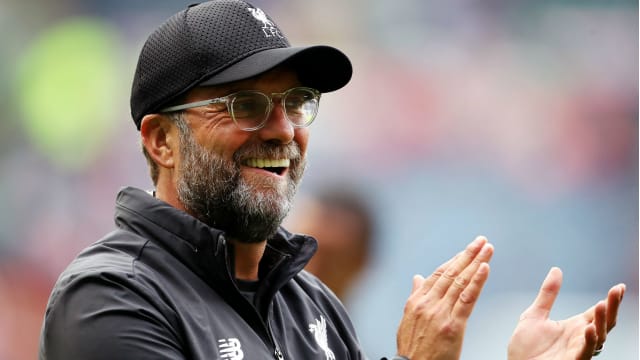 Jurgen Klopp is convinced the 2019-20 Premier League campaign will not be another two-horse race but still believes Manchester City are the team to beat.

Liverpool ran City close last term, finishing just a point behind the eventual champions, who accumulated a total of 98.

The Reds' impressive form was not for nothing, however, as they managed to win the Champions League, making up for their final defeat the season before.

Their pre-season exploits have left a bit to be desired, as Klopp's men have won two of six matches and those victories came against lower-league opposition Tranmere Rovers and Bradford City.

Following defeats to Borussia Dortmund and Sevilla and a draw with Sporting CP, Liverpool were comprehensively beaten 3-0 by Napoli on Sunday, and Klopp recognises an improvement is necessary ahead of what he expects to be a tough season.

When asked if the Premier League will be following a similar pattern to 2018-19, the Liverpool manager said: "Of course not.

"It became a two-horse race last year, but unfortunately there are too many good clubs in this competition. I think even City see it like this.

Thank you for your brilliant support, Edinburgh#LFCPreSeasonpic.twitter.com/QzNOpmKIZU

"They are the big favourite, and all the others try to beat them - and we are one of these teams.

Sunday's match was not all bad for the Reds, however, as 16-year-old Harvey Elliott made his first appearance on the same day his signing from Fulham was confirmed.

The winger showed promising flashes at Murrayfield, and Klopp is excited by him.

"That's why he is here," Klopp said. "I could say so many positive things about the boy.

"We signed him, he came here, he decided [to play] for us and could have gone pretty much everywhere, but he wanted to be part of Liverpool.

"The stories with the boy start early, and already he is the youngest ever Premier League player and has broken quite a few records because of his talent.

"Now he is here, so let's work with him. He needs game time, we will see where he gets that, but he is obviously a fine, fine footballer and that's why we were really interested."