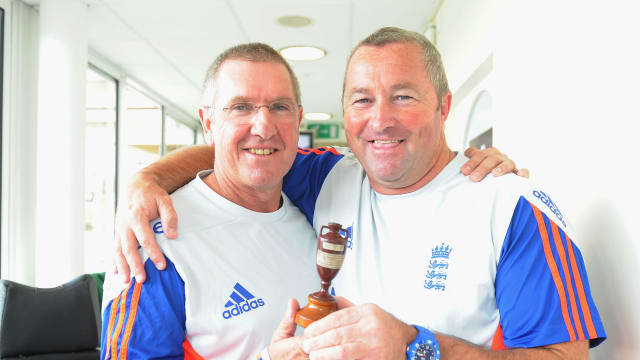 Paul Farbrace has backed England to end "serial winner" Trevor Bayliss' reign as it started with an Ashes triumph over Australia.

Bayliss will step down as head coach following a five-match series which starts at Edgbaston on Thursday.

The Australian has transformed England from Cricket World Cup failures in 2015 to champions on home soil this month.

Bayliss masterminded a home Ashes win over Australia in his first series in charge four years ago and his former long-time assistant Farbrace believes Joe Root's side can finish the 56-year-old's tenure on a high note.

Farbrace, so influential working alongside Bayliss before taking over as Warwickshire sports director in March, told Omnisport: "I think Trevor has done a brilliant job and I'm so chuffed they won the World Cup.

"I know how much time and effort that has gone in over the years, with staff from the behind the scenes and a lot of people who won't ever be recognised for their part - such as the sports science department, physios and medics, there is an awful lot of work that goes into the planning.

"But ultimately Trevor has steered the ship with Morgs [captain Eoin Morgan] towards winning that World Cup and the pair of them deserve all the accolades they get, because they have done an outstanding job for England over the last four years.

"Trevor is a unique character and has done exceptionally well everywhere he's been. Some coaches have good reputations for the odd thing, but he is a serial winner.

"He's been in two World Cup finals, two T20 finals, won the IPL, the Big Bash. His record is exceptional, so it is so pleasing to see him finish the white-ball stuff in the way he has."

Looking forward to seeing what @JofraArcher can do with a red ball?

Farbrace added: "It's a special summer for English cricket; a home World Cup and Ashes in the same six-month period, it's magnificent for the game in this country at all levels of the game.

"If England can win the Ashes it would be the perfect way to see things home and I see no reason why they can't do that with a great bowling attack, strong middle-order and hopefully the top order can fire."