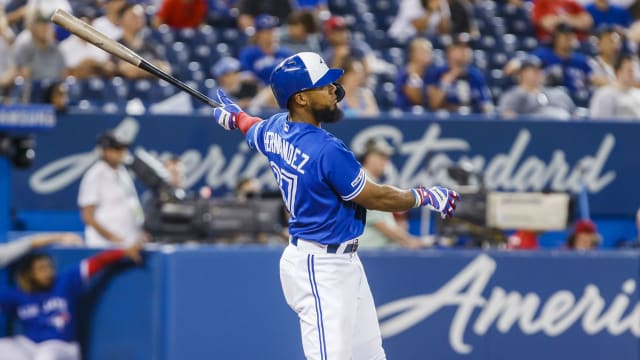 The Toronto Blue Jays topped the Tampa Bay Rays in dramatic fashion in MLB on Saturday.

The Blue Jays trailed the Rays by four runs entering the ninth inning, but rallied to score four and extend play.

The 26-year-old outfielder went two for six at the plate and notched two home runs. He has 14 this year and helped Toronto end a two-game losing streak.

Tampa Bay's Travis d'Arnaud also had a good day, and went two for five, notching a home run of his own as well as three RBIs.

The Blue Jays are fourth in the American League (AL) East standings with a 40-66 record – 18.5 games back from the Rays.

Yoan Moncada went three for four and tallied a home run and two RBIs as the Chicago White Sox beat the Minnesota Twins 5-1.

Nicholas Castellanos went 0 for four in the Detroit Tigers' 8-1 loss to the Seattle Mariners.

Jordan Yamamoto gave up six earned runs in four innings as the Miami Marlins fell to the Arizona Diamondbacks 9-2.

Aaron Judge was hitless in five at-bats in the New York Yankees' 9-5 loss to the Boston Red Sox.

New York have won three straight and are looking to catch up to the Phillies in the National League (NL) East. They have a chance to get on a roll against the team at the bottom of the NL Central in Pittsburgh.