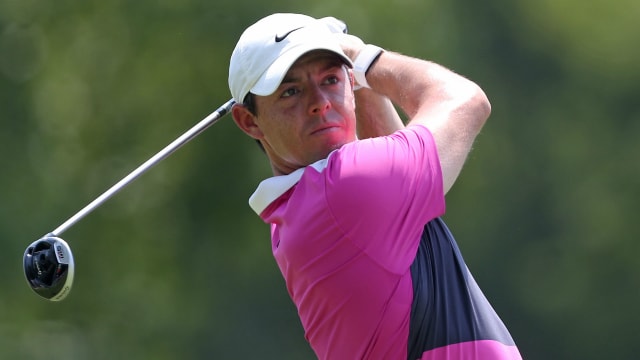 Rory McIlroy fired an impressive eight-under 62 to move into a one-shot lead at the WGC-FedEx St. Jude Invitational on Saturday.

McIlroy, who missed the cut at The Open, holed nine birdies and just one bogey during his third round at TPC Southwind, moving into 12 under and top of a leaderboard featuring many contending stars.

The Northern Irishman made five birdies on the front nine, including three straight beginning at the seventh in Memphis, Tennessee.

McIlroy had a slight setback on the par-four 12th but recovered well with four more birdies on his last five holes, including a successful 27-foot birdie putt on 18 to take the outright lead.

However, if McIlroy wants his third win of the year he will have to hold off a surging field trailing closely behind him.

Brooks Koepka moved into second place at 11 under and 36-hole leader Matt Fitzpatrick is a shot further back.

Leishman produced a chip in off the green for an eagle at the par-five 16th hole.

Look out for Leishman ...

A chip-in  for @MarcLeish to get to 7-under, just four shots off the lead.#LiveUnderParpic.twitter.com/0nvDD51L5I

Justin Thomas (66) and Tommy Fleetwood (65) climbed up the leaderboard to join Webb Simpson (68) and Bubba Watson (68) in a tie for 10th place at seven under.

Meanwhile, Dustin Johnson was again unable to get going, shooting a third straight one-under 69 to be tied for 26th.