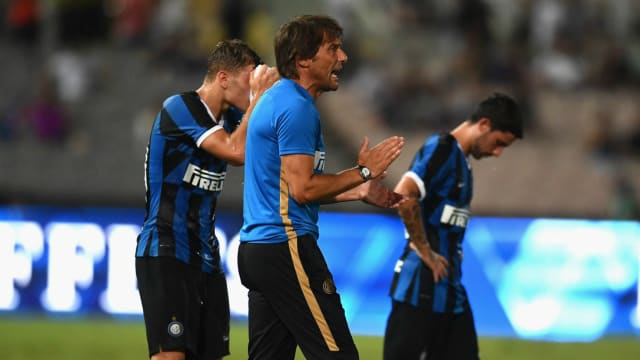 Inter prevailed 6-5 on penalties against Paris Saint-Germain after forcing a shoot-out with the last kick of an absorbing friendly in Macau.

The Serie A side appeared set to pay for their profligacy until Samuele Longo struck in the 94th minute to cancel out Thilo Kehrer's first-half header.

PSG, having led for close to an hour in energy-sapping conditions, then stumbled to a first pre-season defeat as Samir Handanovic denied teenagers Arthur Zagre and Adil Aouchiche from 12 yards.

Thomas Tuchel's men had needed Alphonse Areola to make a string of superb stops during regulation time before substitute Longo's shot squeezed beneath his body in the dying seconds of normal time.

France international Areola, who shared the gloves with Gianluigi Buffon last season, made three fine saves throughout the early exchanges, including one from Layvin Kurzawa's misdirected defensive header.

The Ligue 1 team's nerves were settled when defender Kehrer escaped Milan Skriniar's attention and headed in Pablo Sarabia's free-kick in the 41st minute.

PSG's disjointed defence appeared no more secure after the goal as a Danilo D'Ambrosio pass sliced them apart within seconds of the restart, only for the impressive Areola to thwart Ivan Perisic.

The 26-year-old then produced another important block to deny Nicolo Barella an equaliser.

The game's second goal eventually arrived at the other end as Longo's shot squirmed under Areola, setting the stage for Handanovic's heroics.

The Slovenian spared team-mate Antonio Candreva the indignity of fluffing a chance to score the winner - the attacker hitting the crossbar with a Panenka - with his twin saves helping head coach Conte to a second pre-season victory.