Guardiola: Incredible Rodri could be Manchester City's holding midfielder for a decade 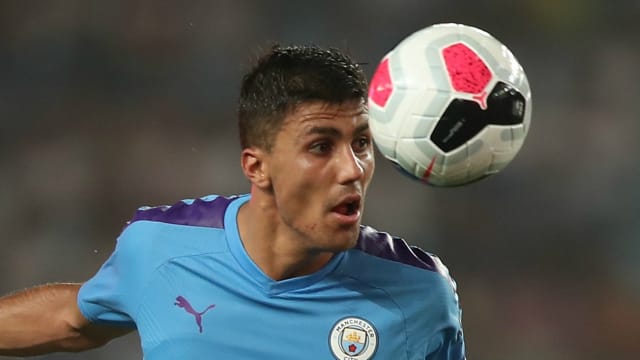 The Spain international has made a strong impression during pre-season, with Guardiola's side completing their warm-up for 2019-20 with Saturday's 3-1 defeat of Yokohama F. Marinos.

Kevin De Bruyne scored the opener and then set up Raheem Sterling for City's second goal before Lukas Nmecha made sure of their victory with a late third.

City will now begin preparations for the season's curtain-raiser against Liverpool in the Community Shield next weekend, in which Guardiola seems to expect Rodri to impress.

"Kevin made another great game," Guardiola told reporters. "It's important to have his quality for the vision to make the last pass when the opponent defends in a high line.

"But Rodri was incredible today. We knew it, but today I can assure you we have an incredible holding midfielder for the next decade, or at least the years he will be here with a contract.

"Bernardo [Silva] is back too at his normal level, Sterling continued, and John Stones and Aymeric [Laporte] are back. These guys played incredibly well in the game today."

The perfect way to sign-off our Asia tour!

City were not always at their best against Yokohama, but Guardiola is unconcerned about his team's form.

"I know them better so now I don't have any doubts about what they can do," Guardiola said of his players.

"I'm not talking about winning or losing but today for example, against a team second in the [J1 League] table with an incredible dynamic, and I have no doubts that the team will be ready again to try.

"The game was incredibly tough, and it was an incredible test for preparing not just for Liverpool but the beginning of next season.

"It was perfect for us to play this kind of game because if you don't do what you have to do, they have incredible quality and they took a lot of risks. They played so quick and so good, and we were in real trouble."