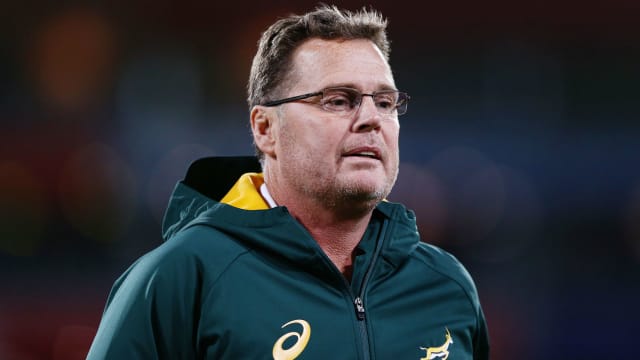 Rassie Erasmus admitted South Africa were fortunate to escape with a draw from their Rugby Championship clash with New Zealand after a dramatic finish in Wellington.

The Springboks led 6-0 in the first half but faded after a promising start to trail 16-9 in the closing minutes of the contest.

However, having secured a sensational 36-34 victory over the All Blacks at the same venue in September last year, South Africa once again stunned the reigning world champions.

Herschel Jantjies managed to get his hands - and also his head - to Cheslin Kolbe's kick before seizing on the loose ball to score a last-gasp try, Handre Pollard restoring parity by adding the extras from the tee with the final act of the game.

"To play the number one team in the world and be lucky at the end there, it was almost like last year," director of rugby Erasmus said.

"To come away with a draw, I guess we're satisfied with that. The first 35 minutes we played very well while they totally dominated the second half. So fairly lucky, in a big way."

The Boks stayed in the fight to force a 16-16 draw vs All Blacks in Wellington. Well done manne.#StrongerTogetherpic.twitter.com/6D5Cac78be

South Africa failed to make the most of their early dominance, allowing their opponents to take a 7-6 half-time lead thanks to converted try from Jack Goodhue that stemmed from a turnover near the halfway line.

While disappointed at the lack of points they managed to score during their period of control, Erasmus was pleased with his side's performance before the break.

"I was frustrated in a sense that we dominated a lot of things except line-outs," he said.

"All the other facets we dominated. Especially when they were almost under caution from the referee for repeated infringing and we missed the penalty when we could have gone nine points up, then they scored that turnover try and that swung the momentum.

"[We were] lucky to escape, but the first 40 minutes we played really good tactical rugby."