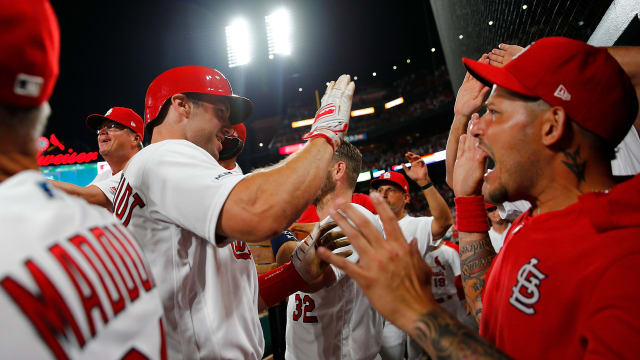 The St Louis Cardinals moved top of the MLB's National League Central for the first time since May on Friday.

St Louis claimed the NL Central lead thanks to a 5-3 victory over the Houston Astros as they extended their winning streak to six games.

Coupled with the Chicago Cubs' 4-3 defeat to the Milwaukee Brewers, the Cardinals top the division for the first time since May 6.

Paul Goldschmidt highlighted the Cardinals' efforts after hitting his fifth home run in as many days.

St Louis were trailing the Astros 3-2 until Goldschmidt's three-run homer put the Cardinals ahead for good.

Matt Wieters also hit a home run and Kolten Wong had an RBI single earlier in the game to score Goldschmidt.

Houston scored twice in the fourth inning and brought in one more run in the eighth, but then the Astros were shut down in the final frame. They moved to 66-39 with the loss, which was given to Ryan Pressly.

Andrew Miller was given the win and Carlos Martinez earned the save.

Nelson Cruz is on fire. He homered for the seventh time in his last five games during the Minnesota Twins' 6-2 win over the Chicago White Sox.

Zack Wheeler made his first appearance since July 7 after suffering right shoulder fatigue. He struck out seven over 5.3 innings as the New York Mets were 6-3 victors against the Pittsburgh Pirates.

Cincinnati Reds right-handed pitcher Luis Castillo had a tough outing against the Colorado Rockies. He gave up eight hits and six earned runs in five innings of work during the 12-2 loss.

It was a low-run night for both the Tampa Bay Rays and Toronto Blue Jays in the former's 3-1 triumph. However, Toronto really struggled to get things going as five batters came up empty, including Cavan Biggio and Lourdes Gurriel Jr, who were both 0 for 4.

Two highlights in one? We will take it if Alex Verdugo keeps making plays like these for the Los Angeles Dodgers, who beat the Washington Nationals 4-2.

A slide and a strike. pic.twitter.com/fwho3ybQgE

In the last two matchups, the Red Sox have obliterated the Yankees. New York will try to get one back when they start CC Sabathia (5-5, 4.50 ERA) on Saturday. Boston will counter with Eduardo Rodríguez (12-4, 4.10).