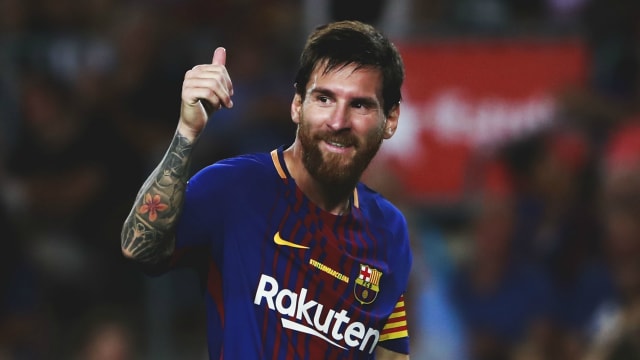 Antoine Griezmann is proud of winning Lionel Messi's praise and says he is "desperate" to play alongside the Barcelona superstar for the first time.

France forward Griezmann joined Barca from Atletico Madrid earlier this month but is yet to share the pitch with captain Messi, who skipped the club's tour of Asia due to his involvement at the Copa America.

Messi, 32, has spoken highly of his new team-mate in the past, describing him as "one of the best" in the world in 2018.

Griezmann was being linked to Barca at the time and, having now made the move, is looking forward to making up for lost time.

"His words made me feel very happy," Griezmann told Sport. "He's the best. When he talks, the whole world listens. He knows this.

"That he would say that about me made me feel very proud. I insist that I'm desperate to finally play alongside him.

"I want to meet him, get to know him, watch him in training, play alongside him, provide assists. I've thought about it when I'm in bed, at training, and watching videos.

"You make the 'film' in your head and I know it'll go well. It'll be really nice."

Griezmann appears likely to form a fearsome front three with Messi and striker Luis Suarez when Ernesto Valverde brings his entire squad together back on home soil.

And although he was the figurehead of Atleti's attack, slotting in alongside two established LaLiga stars sits comfortably with the Camp Nou newcomer.

"Later, you have to show it out on the pitch, but I trust us, I trust the team.

"There's also Ousmane [Dembele], Malcom, Philippe [Coutinho] too. There are a lot of top-quality attackers who I'm sure will help the team do great things."

That could still include Neymar if the Paris Saint-Germain forward gets his wish for a move back to Barca.

"Let's see what happens," Griezmann said. "There are a lot of details to a transfer. Neymar is world-class, a top player, so he could fit in at Barca."