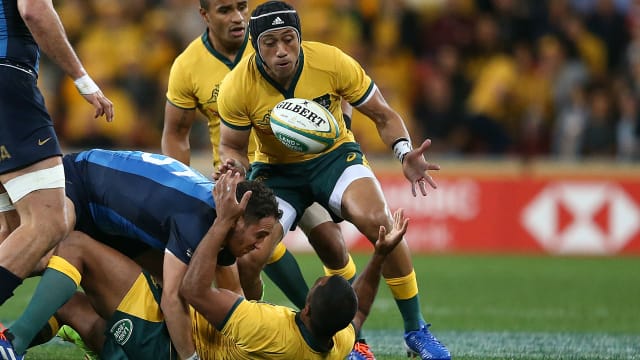 Christian Lealiifano marked his emotional Australia comeback with an impressive display as the Wallabies claimed a much-needed 16-10 victory over Argentina in the Rugby Championship to ease the pressure on head coach Michael Cheika.

Lealiifano started at fly-half on Saturday at Suncorp Stadium, returning to the international fold almost three years after he was diagnosed with leukaemia.

The Brumbies star linked up well with veteran scrum-half Will Genia and contributed 11 points with his right boot, adding to a sole try from Reece Hodge, as Australia bounced back from their 35-17 loss to South Africa by inflicting a seventh straight defeat on the Pumas.

Cheika's men did not need to be at their best to overcome a below-par Argentina side that struggled to retain possession, but the Wallabies can nevertheless take heart from a morale-boosting victory ahead of their daunting clash against New Zealand on August 10.

The first points of a frantic first half that featured plenty of handling errors came courtesy of a penalty from Lealiifano.

Nicolas Sanchez responded with three points of his own before Argentina spurned an excellent chance to move ahead. A flowing break down the left got the Pumas to five metres out with plenty of numbers over, but an inaccurate pass led to Nahuel Tetaz Chaparro knocking on.

That error was soon punished as Australia moved ahead courtesy of a slick set-piece play. Tevita Kuridrani and the impressive Samu Kerevi served as decoy runners from a scrum, and Marika Koroibete surged into a gap before working the ball through Kurtley Beale for Hodge to score.

What a try! Beautiful work from Hodge. Australia lead going into half time.

Lealiifano converted from the right touchline and added two more penalties early in the second half before making way for Matt Toomua, extending the lead of the increasingly assured hosts to 16-3.

That advantage initially came under little threat as Argentina, hampered by the absence of talismanic hooker Agustin Creevy, failed to muster any real momentum in attack.

Facundo Isa eventually burrowed over from a lineout drive for a 74th-minute try converted by Joaquin Diaz Bonilla, but Australia – who introduced James O'Connor off the bench late on for his first appearance since September 2013 – were deserving winners.