All Blacks suffer Retallick blow ahead of World Cup 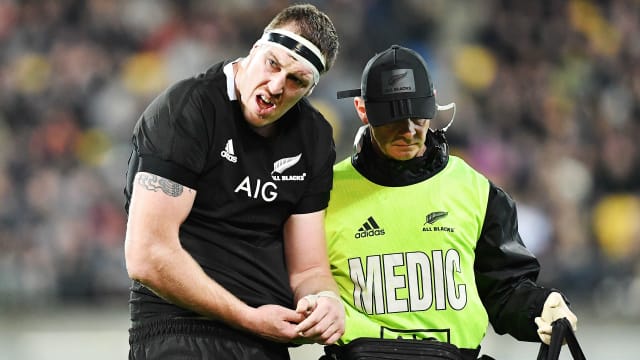 The second-rower was hurt during a ruck midway through the second half of the game in Wellington on Saturday and left the field in obvious discomfort with an injury to his left arm.

The All Blacks were leading at the time of his departure but a last-gasp Herschel Jantjies try, converted by Handre Pollard, saw the Springboks rally to draw level at 16-16 by the end of the game.

All Blacks boss Hansen confirmed the severity of the injury in his post-match press conference, leaving Retallick facing a fight to recover in time for the Rugby World Cup later this year.

"He's dislocated his shoulder," Hansen said. "Whether he's fractured it as well, we don't know. We just have to sit and wait."

The All Blacks retain the Freedom Cup with a 16-16 draw with South Africa in Wellington.#NZLvRSA#BACKBLACKpic.twitter.com/bVLRGKHWeu

The 28-year-old Retallick is widely considered one of the best players at his position and was part of New Zealand's successful squad at the 2015 World Cup.

This year's tournament begins on September 20, with the reigning champions opening their Pool B campaign against the Springboks the following day.

Hansen will wait for a further update on Retallick but was pleased with the performance from his much-changed team, insisting there was no need to panic despite surrendering the lead so late on in proceedings.

"We've chosen over the last couple of weeks to name two different sides. We haven't had much preparation time," Hansen said.

"We knew due to some of the stuff we were introducing we would be a little off. But there were enough signs there to suggest if we keep working away and get our timing better and get our execution better we will be able to hurt some teams.

"We're not going to panic. We're going to take a deep breath and keep moving."