Will Jorginho get chance to shine in new Chelsea era under Frank Lampard? 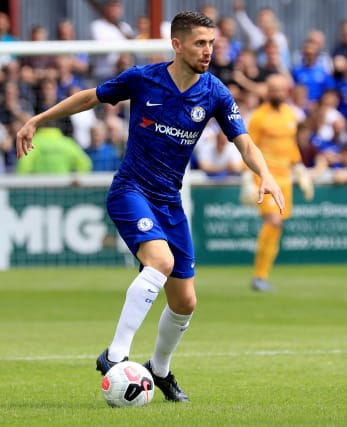 Suddenly the lightning rod for criticism could become the spark plug for expression.

New manager, new narrative; but the curious case of Jorginho and the midfield metamorphosis might yet come to define Frank Lampard’s nascent Chelsea stewardship.

Italy midfielder Jorginho was Maurizio Sarri’s man, hailed as the chief exponent of the “Sarriball” possession play on his £57million arrival from Napoli in the summer of 2018.

Sarri’s man in the middle attracted all the brickbats from the terraces any time Chelsea laboured under the former Napoli boss’ heavily-proscriptive system.

The 27-year-old was rarely able to cut loose and step out of his deep-lying role, and Sarri constantly railed against claims he was wasting N’Golo Kante by deploying France’s wrecking-ball World Cup-winner further upfield.

“I have more space to create and I’m more free, so I can do many things with my creativity,” said Jorginho, of a fresh task under new Blues boss Lampard.

An expected 4-2-3-1 approach might give Chelsea more stability, especially if Kante is restored to his ball-winning best at the midfield’s base.

Sarri never settled at Stamford Bridge, and so – despite pulling off a third-place Premier League finish and landing the Europa League title – the chain-smoking former banker secured a quick return to Italy with Juventus.

Jorginho is determined to down in in west London however, insisting he has been energised by Lampard’s arrival.

Chelsea’s record goal-scorer, Lampard is back at the Bridge as top boss and that after just one year in management with Derby.

Too good a chance to turn down, now the 41-year-old must fight to ensure his tenure is not too much too soon.

The scale of loss in Eden Hazard’s move to Real Madrid will only be quantifiable in his absence.

The Belgium forward had a direct hand in 38 goals last term, scoring 21 and laying on 17 more. His 15 Premier League assists proved the high mark across Europe’s top five divisions.

Chelsea’s two-window transfer ban has left the Blues unable to seek a top-level replacement for Hazard, and Lampard is busily promoting from within.

The Chelsea board must sit on a pile of Hazard cash that could rise as high as £150million – that currency not yet able to burn a hole in the Blues’ pocket.

Christian Pulisic is a new arrival at least, the United States forward signed in January but was allowed to see out the season at Borussia Dortmund.

The 20-year-old will head a clutch of youngsters expected to fill the Hazard void and drive Chelsea’s new era, with academy graduate Callum Hudson-Odoi also firmly in that category.

Assistant Jody Morris and boss Lampard are still rookies in the management game too, but the former Chelsea stars understand the club’s fabric and value their youth talent.

After so long making youngsters bide their time for a first-team break, maybe Chelsea’s kids are finally alright – both on the pitch and in the dugout.

Leicester see off Burnley to go top of the Premier League