Warner, Smith and Bancroft in Ashes squad due to 'excellence' 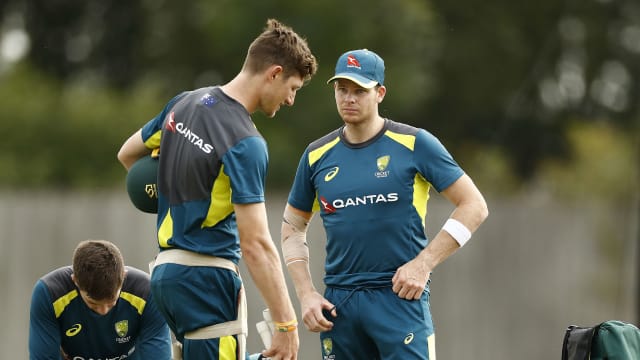 Former captain Smith, Warner and Bancroft are all part of the 17-man party for the five-Test series against England after serving bans for their part in the ball-tampering scandal that engulfed Australian cricket last year.

Warner and Smith featured throughout Australia's run to the World Cup semi-finals, where they lost to eventual winners England, whereas Bancroft has the opportunity to represent his country for the first time since his nine-month suspension.

The opening batsman impressed in English conditions with Durham this season, scoring two centuries and three fifties as part of an average of 45.37 in County Championship Division Two, while his 93 in Australia's warm-up match this week also decisively caught Hohns' eye.

"David Warner, Steve Smith and Cameron Bancroft have forced their way back into the Test squad through the excellence of their recent performances," he said.

"David and Steve also have the advantage of being proven players at Test level, while Cameron has produced impressive numbers for county side Durham this season. His innings in the intra-squad match in Southampton on a tough pitch was outstanding and showed his quality."

Bancroft will contest a place at the top of the order for next week's series opener at Edgbaston, with Joe Burns omitted despite scoring 180 in Australia's previous Test against Sri Lanka, but the tourists' true strength comes in the seam-bowling department.

Pat Cummins tops the Test rankings, while Mitchell Starc and Josh Hazelwood are joined by James Pattinson and Peter Siddle.

Ashes veteran Siddle's maiden tour of England came a decade ago, while his Victoria colleague Pattinson is back in the Test fold for the first time since 2016 – persistent injury woes forcing the paceman to undergo back surgery a year later.

"James Pattinson has demanded inclusion after impressing everyone on the Australia A tour with his pace and control, following on from a good season at home for Victoria," Hohns said.

The focus on pace comes at the expense of spin specialists, with Nathan Lyon the lone representative in that regard, although Hohns expects middle-order batsman Marnus Labuschagne to pick up some of the slack if required.

"We have faith in [Lyon's] ability, we know our strength lies in our pace attack and we have Marnus Labuschagne's leg spin as another spin option," Hohns said.

"He has bowled almost 200 overs for county side Glamorgan in first-class cricket this season."

Hohns added: "We have not won an Ashes series in the United Kingdom since 2001 but we are confident that this group of players can break that cycle and ensure we retain the urn that we won at home in the summer of 2017-18."