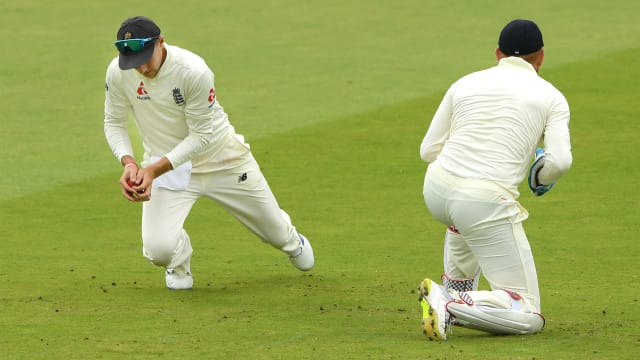 England's Test win over Ireland at Lord's was not a fair contest between bat and ball due to a substandard Lord's playing surface, according to home captain Joe Root.

A demolition job by new-ball pair Chris Woakes and Stuart Broad saw Ireland bundled out for 38 on Friday, a day that began with the visitors dreaming of a historic maiden triumph in the longest format after being set 182 for victory.

England began in similar batting turmoil as they were dismissed for 85 in the first session of the match, with Ireland's seam attack led by the excellent Tim Murtagh wreaking havoc on a green pitch.

The five-match Ashes series against Australia begins at Edgbaston next week before the second Test comes to Lord's and Root seemingly challenged head groundsman Karl McDermott to up his game before that keenly anticipated clash.

"I don't like saying this, but the wicket was substandard for a Test match," Root told a post-match news conference.

"I thought it wasn't even close to a fair contest between bat and ball throughout the whole game.

"First innings, last innings, when you are getting scores like that, that tells a story in itself."

Regular no.11 Jack Leach has been named Player of the Match at Lord's for his 92 opening the batting.

Asked whether he was preparing for similar pitches during an Ashes series expected to be dominated by two high-class seam attacks, Root replied: "I hope not.

"You have to find ways of coping with that. It was extreme in this game. From a batting point of view, it's hard to take too much out of it."

Although England rested World Cup heroes such as Ben Stokes and Jos Buttler for the Ireland match, Root conceded players like himself who stayed on for the quick change in formats were feeling "knackered".

"It's been 10 weeks of hard cricket, of high emotion, of ups and downs. It does take a lot out of you," he added.

"You have to suck it up and get on with it. It's not been perfect, but we've dealt with it pretty well.

"We've never been in a position where we've won a World Cup, so for half the side to be part of that and then very quickly adjust to Test cricket is unusual.

"You've never been in that position before, so it's hard to know how you're going to cope."